And One: Patricia Hoskins

The past few years have seen a few of the greatest scorers and rebounders in NCAA Division I women’s basketball. In 2016, Rachel Banham tied the single-game scoring record, putting up 60 points on 19 field goals against Northwestern. The following year, Kelsey Plum finished off her career setting a new single-season scoring record with 1,109 total points, also overtaking the career scoring record with 3,527 points in her four years at the University of Washington. Just behind her is the second all-time scorer, Kelsey Mitchell, who finished off her career at Ohio State last year with 3,402 points, including a record 497 three-point field goals over her four years. On the boards last year, both Natalie Butler and Teaira McCowan passed Courtney Paris’s 2006 single-season rebounding record; McCowan had 544 boards, while Butler set the new record with 563 total.

Of course, the three-point line and increased number of games helps a lot of today’s players overcome the long-held records; when we look at averages, no one has ever dominated in both the scoring and rebounding columns like Mississippi Valley State University’s Patricia Hoskins.

Patricia Hoskins’ roots trace back to Greenville, Mississippi, where she played at O’Bannon High School in the early ’80s. At 6’2, Hoskins played center for the Lady Waves — sometimes called the “Green Wavelettes” — who enjoyed success in the state her junior and senior years. Beating their opponents by more than 35 points per game, O’Bannon went 30-1 in the 1984 season before running in to No. 3 Benton in the state semifinals.

The Lady Waves were down by 16 early in the third quarter, but head coach Mark Sampson switched to a full-court press that gave O’Bannon the opportunity to play catch-up through much of the second half. With just under six minutes left, Hoskins tied the game up at 55 and even took a three-point lead on a score by Hoskins later in the quarter, but Benton would storm back to win on a late pair of free throws. Hoskins led with 28 points and 13 rebounds, and those kinds of numbers would become standard for her.

The following year was about revenge. The O’Bannon girls quickly rolled to a No. 1 ranking. After starting 12-0, Hoskins — who was off to a hot start with 28.4 points and 17 rebounds on average — told the local Clarion-Ledger that the team was relishing their time on top: “It’s the biggest thing that could ever happen to a little country school like this.”

Hoskins had already put up career highs that season of 39 points and 24 rebounds on separate occasions, and she was garnering interest from over 70 schools — including powerhouses Louisiana Tech and San Diego State — as one of the best bigs in the country.

But Hoskins and O’Bannon’s sights were on revenge in the state tournament. They faced Benton on February 27, and though the score was tight again, ultimately Hoskins’ 30 points would lift O’Bannon over the Lady Bulldogs 64-57.

Ultimately, though, the Green Wave’s result was the same. They met up with No. 6 Belmont in the state 2A semifinal game, and despite 26 points and 18 rebounds from Hoskins, O’Bannon fell again. Hoskins was an All-Tourney selection, but her high school playing days were over after a successful 26-2 senior season.

Perhaps the top prospect out of Mississippi in the 1985 class, Hoskins ultimately chose to stay close to home, signing with Mississippi Valley State University, just 43 miles down the highway from Greenville. The Delta Devilettes were coached by Jesse Harris, who had come over from the men’s basketball team as an assistant when the women’s team was reinstated. Harris was coming off of a 9-18 season.

And there’s no doubt Hoskins was immediately their best player. Five games into her freshman season, she averaged 23.2 points and 12 rebounds. Valley finished the year 12-14 on the back of Hoskins, who averaged 25.0 points on 50.0% shooting from the field, 14.5 rebounds, and 2.3 assists. Her rebound average is still fourth-best for a freshman in NCAA Division I women’s basketball history.

Each year saw improvement from Hoskins. In her sophomore season, she was named SWAC Player of the Year and led MVSU to its first conference tournament championship with MVP honors. The Delta Devilettes finished the season 21-7, with Hoskins contributing 27.0 points and 17.0 rebounds per game. That rebounding average is fifth all-time for a single season and tops for any sophomore in Division I history.

Hoskins was once again SWAC Player of the Year in her junior campaign, as MVSU improved upon the 1987 season with a SWAC regular season championship and Coach of the Year honors for Harris. Hoskins played through an ankle injury for a portion of the season but still managed to improve her scoring average, putting up 27.9 points per game. Her rebounding margin fell to (a still astounding) 12.7 per game. For a center, she shot an impressive 36.7% from beyond the arc in the first official year of the three-point line in women’s basketball.

Of course, it was her senior season when Hoskins would cement her prominent place in the record books. Though the Delta Devilettes struggled more in conference than previous years, Hoskins was once again SWAC Player of the Year and had her most productive year. She put up 33.6 points and 16.3 rebounds while grabbing 2.7 steals per game. Her No. 42 jersey was retired after her final game. 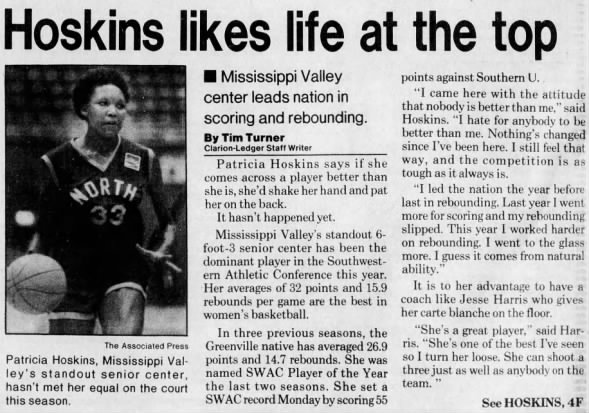 Within a two-week span, she put up two 55-point games against Southern University and Alabama State. That is still the seventh best mark in Division I women’s basketball history, and she is the only player to have multiple games in the top 15 all-time. Her 908 points in her senior campaign is tied for 19th all-time in a season, but 33.6 points per game is still the highest single-season average.

Her career wound down with even more records in her name. Her 28.4 point-per-game career average is best all-time — the next closest player is Sandra Hodge at 26.7 — and her rebound average of 15.1 is second only to Drake’s Wanda Ford at 15.5. Of players with at least 2,000 points and 1,000 rebounds, she leads the rebounding category with 1,662, but she is second overall to Brittney Griner, who put up 3,283 points and pulled down 1,305 rebounds.

At the time, Hoskins’ career scoring mark of 3,122 points was a Division I record. Twelve years later, Jackie Stiles surpassed that mark with 3,393 points. Griner later passed Hoskins, as did Mitchell (3,402) and Plum (3,527), who is now the all-time leading scorer.

Hoskins’ playing career ended sooner than she had hoped. She was not invited to try out for the United States national team in 1992 or 1996, despite her record-setting performance in college. Hoskins voiced her frustration at the lack of recognition of her game. She played professionally during a short stint in Italy, and ultimately her playing career ended there. But her mark on that game, still looming over the record books two decades later, won’t fade.

Though it’s impossible to truly compare players from different eras of the game, Hoskins’ scoring averages speak volumes. For perspective, consider projecting out Hoskins’ scoring averages. In her 1989 senior season, she averaged 33.6 points over 27 games. Had she played 35 games like record-holder Plum, she would have had about 1,177 points, about 68 more than Plum. Stretching her college career from the 110 games she played to match the 139 games Plum played, Hoskins’ total would have reached about 3,945 points, over 400 points more than Plum’s current record of 3,527 points.

The rebounding side is no different. In her sophomore season, she averaged 17.0 rebounds over 28 games. If she had maintained that average over six more games to match the 34 games played by single-season record-holder Natalie Butler, Hoskins would have had 578 total rebounds, 15 better than Butler. Similarly, assume she maintained her 15.1 rebound-per-game average for 29 more games to match the 139 games that Courtney Paris (all-time leading rebounder) played. Hoskins’ total would have gone from 1,662 boards up to about 2,070, which is 36 better than Courtney’s record.

Of course, that doesn’t take anything away from what Hoskins or any of the record-holders did in their careers. Each player’s path is different, and any additional games can alter a person’s career entirely. But, it’s important to understand the dominance of a player like Patricia Hoskins. At a time when the opportunities available to women’s basketball players were even scarcer than they are today, it’s all too easy for the legacy of players like Patricia Hoskins to slip through the cracks.