Breaking down some numbers around the 2021 WNBA schedule

The WNBA (finally) announced its 2021 regular season schedule, amid hints and leaks of a mid-May start.

Now we know the season will officially tip off on Friday, May 14, and it will wrap up on September 19, with 10 of the 12 teams facing off throughout the day. The WNBA announced an official Olympic break from July 15 through August 11, which is especially notable considering the last game prior to that break is on July 11, and scheduled games don’t resume until August 15, leaving space on both ends for potential rescheduled games, an All Star game, and/or a Commissioner’s Cup Game.

With that in mind, let’s break down how the numbers around this schedule stack up in history. And I’ll throw in a few pretty visuals along the way.

This year’s WNBA schedule incorporates more of a focus on a “series” model, according to the league – at some points throughout the season teams play each other consecutively in the same location – to ease travel, which leads to some interesting timing around teams’ first and last matchups.

For example, the Indiana Fever travel to Minneapolis to take on the Minnesota Lynx on September 10, and they’ll stick around to play again on September 12. Interestingly, though, the two play each other again just five days later, that time in Indianapolis. That means these two teams will complete their trio of matchups over just 8 days. That’s the shortest span for two teams to play three regular season games in league history.

Blast from the past: The previous record for a three-game (or more) regular season series was originally set by the Los Angeles Sparks and Washington Mystics in 1998, when they played three times over just 12 days. The 2001 Charlotte Sting/Mystics series and 2017 Lynx/Dream series matched that.

On the other end of the spectrum, due to the Olympic break, the Connecticut Sun and Atlanta Dream series as well as the Los Angeles Sparks and Dallas Wings series will set new records for most days between their first and last matchups. Both face off on the league’s opening day (May 14) and closing day (September 19), for a total of 129 days spanned.

Blast from the past: The previous record in this area is not far off. In 2016, the Wings and Fever played on both opening day and closing day, but the season was one day shorter, so their series spanned 128 days.

Let’s get back to the Lynx and Fever for a minute. Not only do they play all of their games in a short span, they also don’t see each other until 119 days after the start of the season. In league history, that is behind only the 2012 New York Liberty and Tulsa Shock, who didn’t face off until 125 days after the start of the season. 2012 was also an Olympic year, which helps explain the gap. Interestingly, the 2012 Fever and Lynx also didn’t play each other until 119 days in to the season. Of course, more notable was how they ended that season.

Also notable is the Las Vegas Aces and Chicago Sky, who don’t play this year until September 2, 111 days into the season (the 6th latest all-time). This one stands out as it will be the first time former Sparks teammates Candace Parker (now with the Sky) and Chelsea Gray and Riquna Williams (now both with the Aces) face off since leaving Los Angeles. Oh, and those two franchises have some history.

Blast from the past: The very first WNBA game was on June 21, 1997, between the New York Liberty and the Los Angeles Sparks. This year the two teams play for the first time on June 20. That seems like a miss, but hopefully they’ll still find a way to honor that inaugural game.

The 2020 season in Bradenton was originally scheduled with no back-to-backs but ended up with six after several games were rescheduled, so 2021 could be the first season in league history with zero back-to-backs.

A complete lack of back-to-backs is a great marker for a league trying to promote the health and well-being of its players, and it also matches up with a general downturn in their presence over the years. The early 2000s were hit hard by the height of the WNBA’s total team count (16), and the year 2000 in particular was extremely condensed due to shoehorning in an All Star Game (the first being held just one year prior) while also completing the season ahead of the 2000 Olympics in Sydney, Australia, which opened in mid-September.

No back-to-backs of course means no situations where a team is playing three games over a span of four days, and the intentional “series” model allows for completing more games without travel between, at least in theory making a typically packed WNBA season a bit less painful.

Blast from the past: Back-to-back-to-back? Only once in WNBA history hs a team played a regular season trio of games over just three days, but it wasn’t intentional. In 2003, the New York Liberty were originally scheduled to play the Houston Comets at home on August 14, but a massive blackout in the Northeast United States starting that afternoon resulted in the postponement of that game. It was ultimately rescheduled for August 18, which resulted in the Liberty facing a back-to-back-to-back against the Sun on the 16th, in Cleveland against the Rockers on the 17th, and back at home against the Comets on the 18th. The Liberty fared well despite the circumstances, finishing that run 2-1, and counter to what you might expect, the game they lost was the first one against Cleveland, coming off four days of rest. 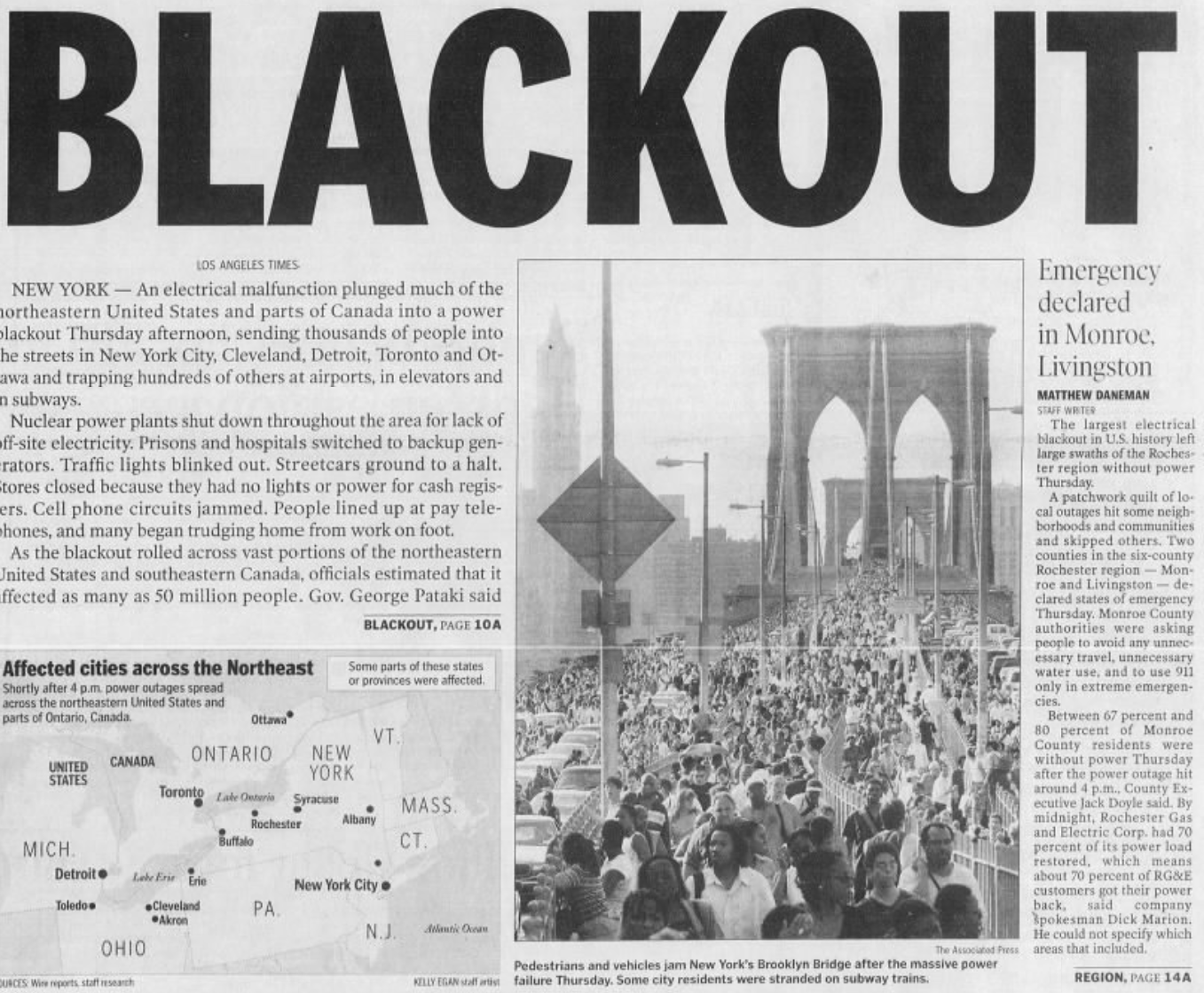 I often use a couple of visuals to get a sense for how packed a schedule is. First, this one which is available on the Across the Timeline WNBA Schedules page: 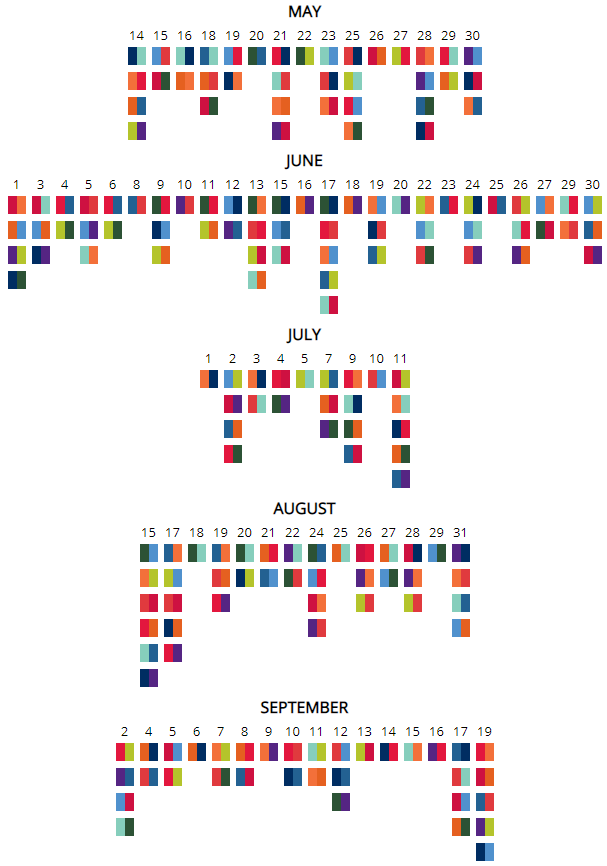 I also like these grid views (hopefully they’ll be on the website soon) which include off days and make it clearer how packed a particular team’s schedule is: 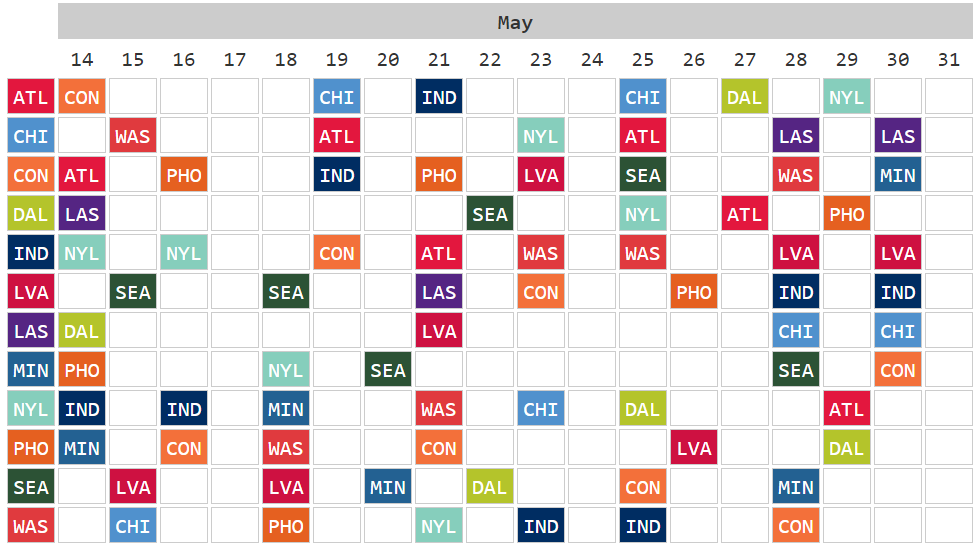 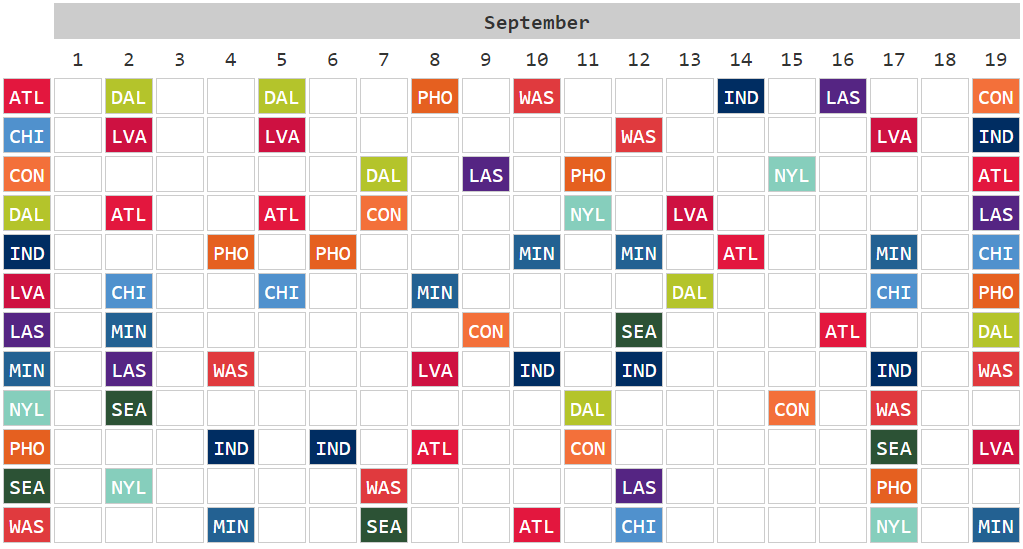 On top of that, there’s also the concept of the accumulating wear-and-tear of a season as it builds on a team over their travel and many games played. To that end, I put together a very rudimentary set of rules to chart accumulating schedule pain:

This obviously does not account for practice days or any individual effects (negative or positive). It’s just a basic manner of, in particular, identifying areas of pain within the league’s schedule. Note: teams are slightly offset at common points to ensure each team is visible. That offset does not accumulate; it’s just a visual adjustment, so always assume a team sits at the closest multiple of 0.5. 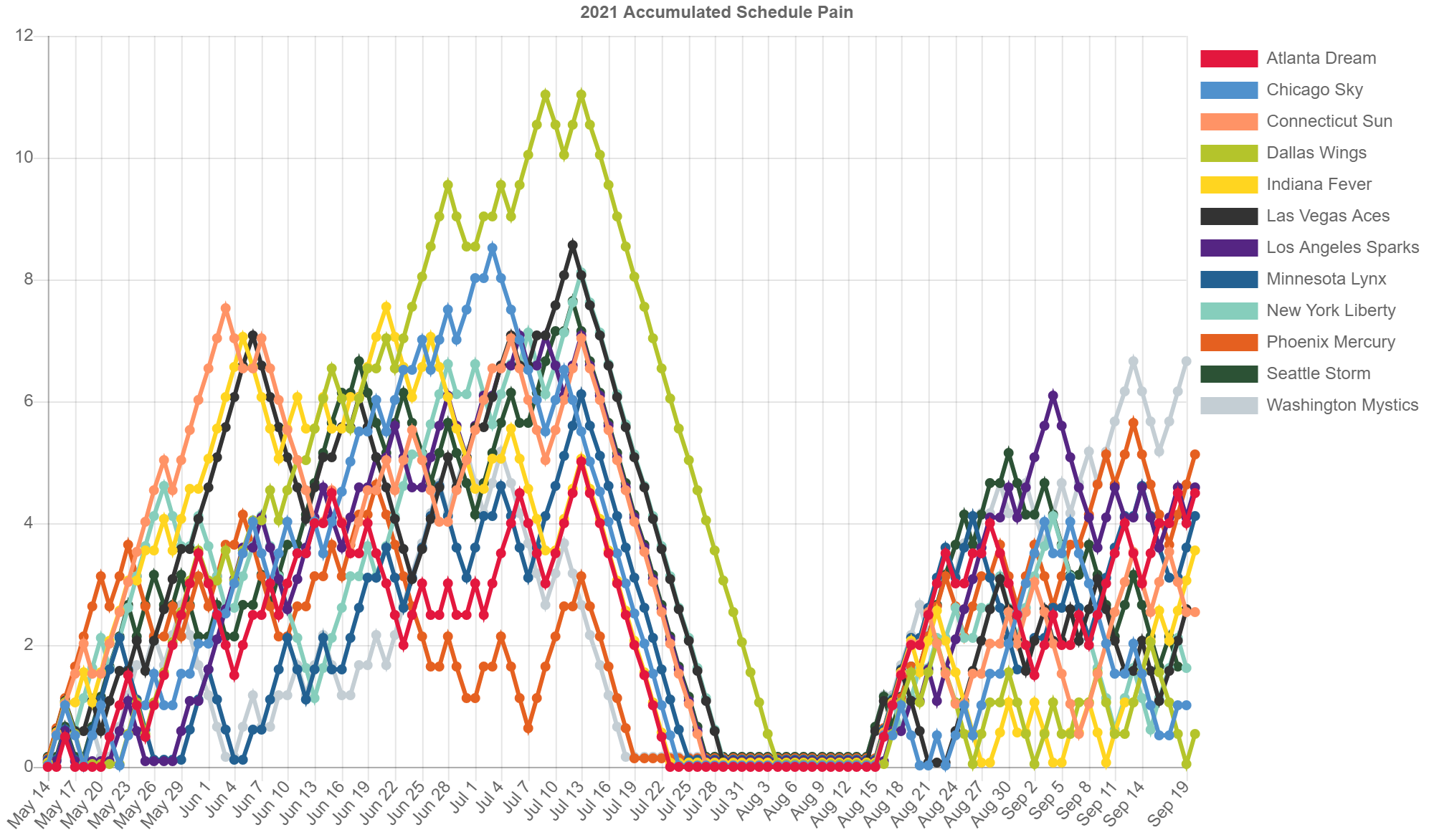 You can clearly see a few things, just for example:

For reference and for comparison, here our a couple other notable seasons, first the aforementioned 2000 season and then the 2018 season, which resulted in public remarks from Lynx head coach Cheryl Reeve about the “awful decision” of packing the season ahead of the World Cup. 2018 was also notable for the Las Vegas Aces having to forfeit a game against the Washington Mystics due to travel issues. 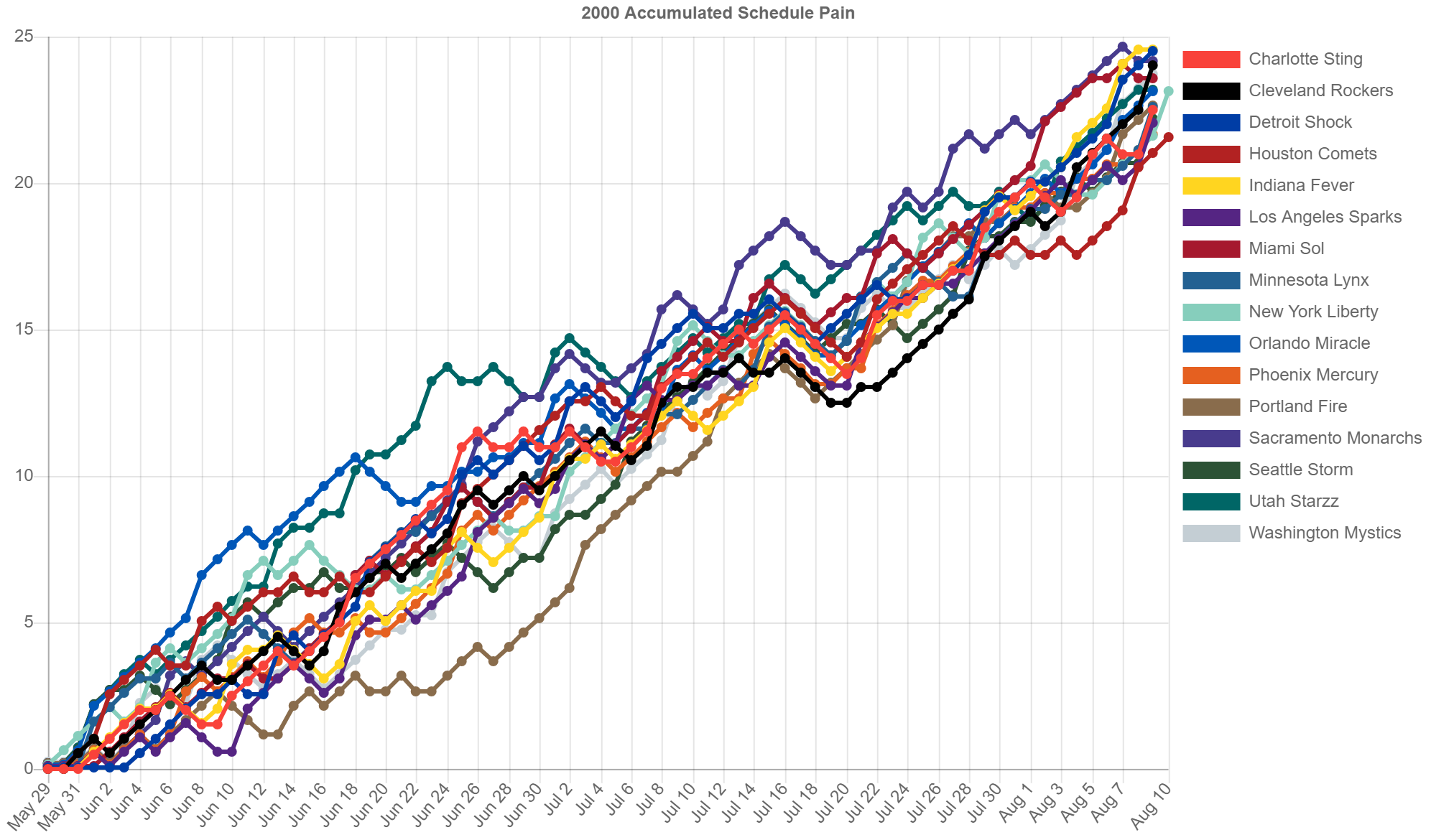 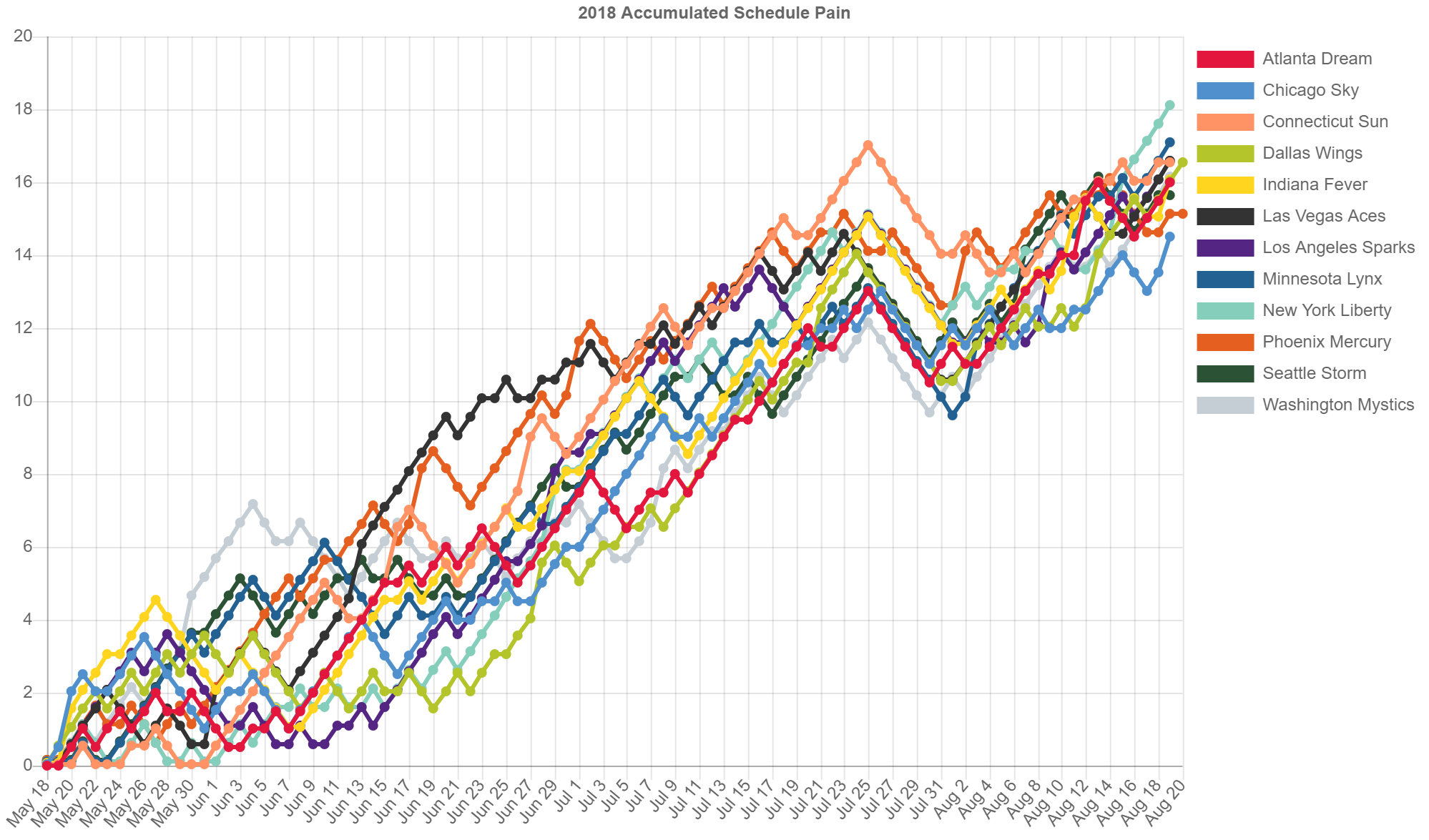 Notice the heights reached by these two seasons relative to the maximum height of the 2021 schedule, and in particular in the 2000 schedule, there are very few parts of the schedule with significant rest.

If you’ve read my work in the past, you’ve likely seen my work tracking milestones through the WNBA season. Now that we have a schedule, we can start thinking about total games and even win milestones that could be reached in 2021. Here’s a quick rundown to get this ball rolling (all numbers reflect regular season totals):