Just under a month ago, the new WNBA Data Explorer was released. If you missed it, here are all the gory details.

Today, I’m introducing several big add-ons to the Data Explorer and a couple other major feature upgrades to the website elsewhere.

At the top of any WNBA page at Across the Timeline, you can now search for players, coaches, and teams/franchises to pull up full stats, awards, and more for any of them, past or present. Just like with the player pages, career/overall stats split by default by season/team, but they can be split instead by any combination of Home/Away, Opponent, Opposing Coach, Team, Win/Loss, and more.

In addition to basic and advanced stats for that particular coach/team, you can also select opposing stats for any coach or team.

Here are a few example links to specific coaching data:

Here are a few example links to specific team/franchise data:

With offensive rating, defensive rating, and net rating now on the coach/team pages, it is now included in several team searches in the Data Explorer as well. Here are a few examples:

In addition to searching for individual games, full seasons, or careers, you can now also search for streaks of consecutive games in the following ways:

These are similar to the team win/loss streak search in that they compile runs of games, presenting aggregate data on those runs as well as listings of game logs for the matches returned.

Let’s run through a few examples to show what you can do with these new searches.

Get the latest results with the search here: consecutive regular season games with 10+ PTS

I’ve been talking about this one all season as there are currently two active streaks in the top 10 here: Arike Ogunbowale (5th - 58 games) and A’ja Wilson (8th - 51 games), though it would take another season still to reach Cynthia Cooper’s 92-game streak.

Get the latest results with the search here: consecutive regular season games with 20+ PTS 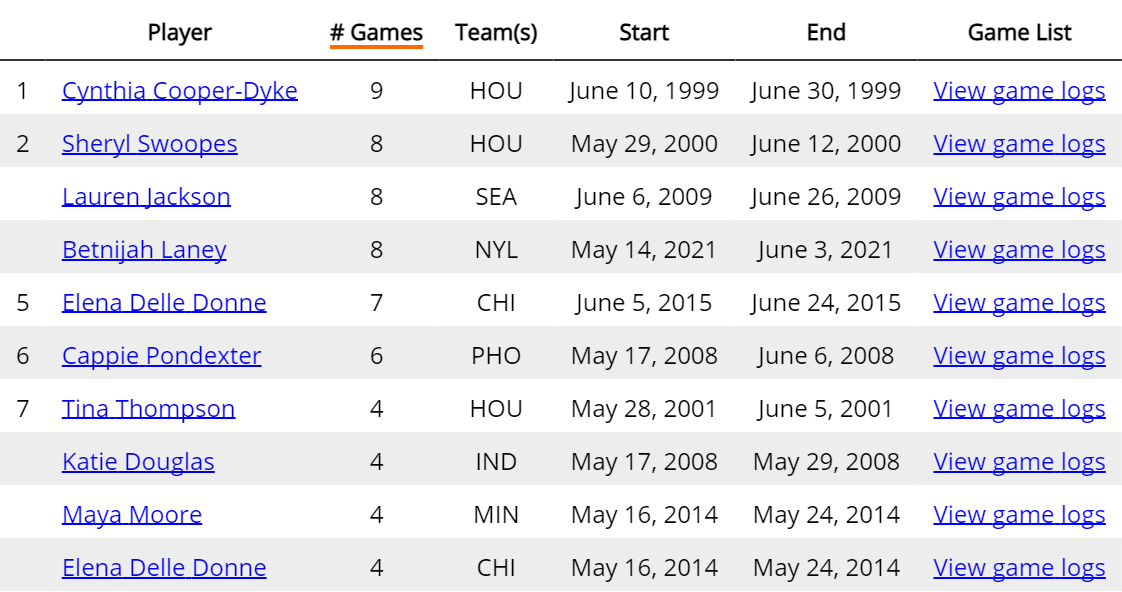 Another big one this season, as Betnijah Laney put together 8 consecutive games with 20 or more points to start the 2021 season, tied for the 2nd-longest such streak in league history. Of course Cynthia Cooper is at the top of this leader board, too.

Here are a few more:

There’s always more in the works, so stay tuned for future updates, and if you run in to a problem or need help finding what you’re looking for, feel free to reach out at mail@acrossthetimeline.com.