Every Friday I’m diving in to a WNBA first in a series I’ve creatively titled Friday Firsts. If you missed the first two Friday Firsts posts, go back and check them out:

Today I get to talk about a big WNBA milestone on the anniversary of the day it happened; 15 years ago today, on June 25, 2006, Lisa Leslie became the first WNBA player to score 5,000 points.

Lisa Leslie averaged 20.1 points per game in her four years at Southern California, including 21.9 per game in her senior year when she was named Naismith Player of the Year. Her 2,414 points over 120 games in college made it no surprise when she went on to be a dominant scorer in the WNBA.

Even before Leslie went to USC, she was a star at Morningside High School in Inglewood, California, where she famously scored 101 points in a half (and then four more points, which were later stricken from the final stats). 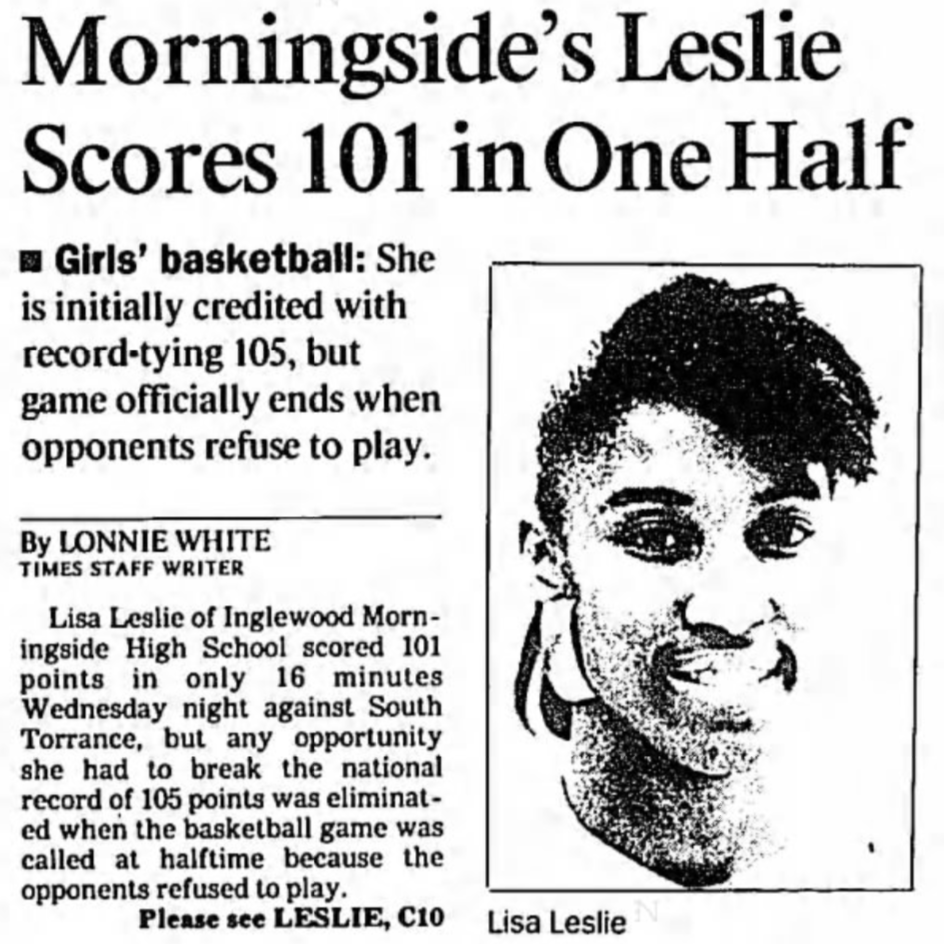 Lesie hit the ground running in the WNBA, scoring 16 in the WNBA’s first game (along with 14 rebounds). She followed that up with 8 consecutive games in double figures and 20 or more in three of her first eight games. She finished the season averaging 15.9 points and 9.5 rebounds, one of six players to average 15+ points in that inaugural season, led by MVP Cynthia Cooper. 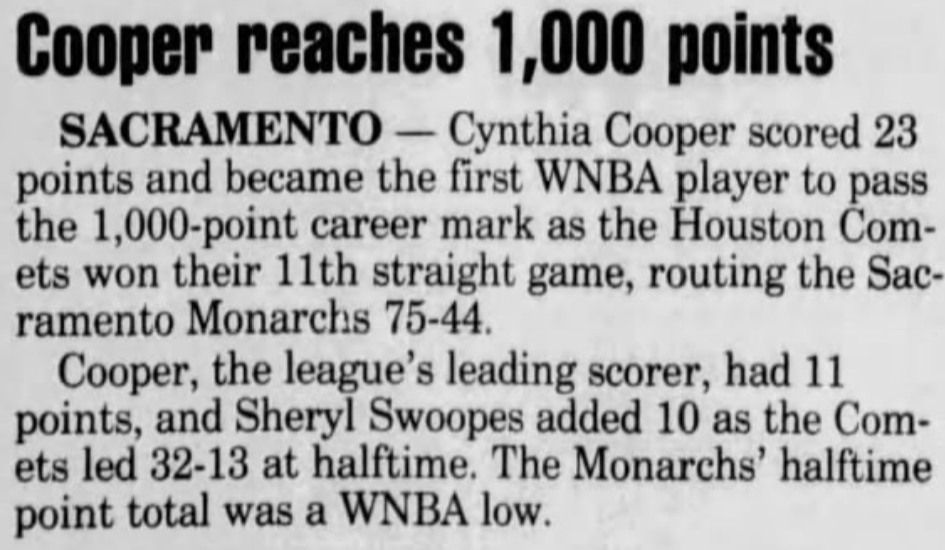 From there, Leslie’s scoring average picked up while Gillom’s dropped; while those three players were also the first three to 2,000 points, Leslie got there before Gillom, still trailing Cooper.

Jennifer Gillom may have fallen behind Lisa Leslie in terms of speed to 2,000 points, but the game in which she got there is many times more interesting. Gillom, still playing for the Phoenix Mercury, was playing for new head coach Cynthia Cooper – yeah, that same Cynthia Cooper that got to 2,000 points first. Moreover, they were facing off against the Houston Comets, coached by Van Chancellor, who Cooper played for with the Comets and Gillom played for in her college years at Ole Miss. Gillom got to 2,000 points, but Chancellor and the Comets got the win. 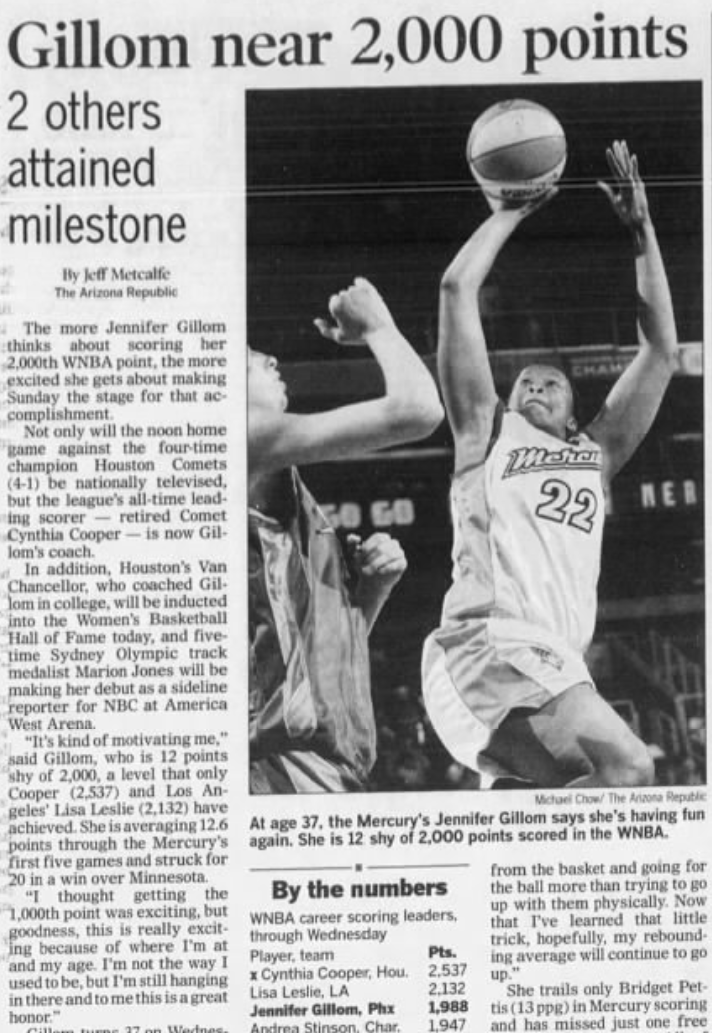 It might be clear from that table where Leslie had the advantage going forward: 2000 was her age-27 season, about a decade younger than both Cooper (37) and Gillom (36). Cooper left the league for a couple years before a brief return ahead of her ultimate retirement in 2003, and Gillom also retired after the 2003 season, both before they could get to 3,000 career points.

In the meantime, it opened the door for Lisa Leslie, and she walked right through, becoming the first WNBA player to score 3,000 points on July 22, 2002. She won a pair of league titles and took over the title of all-time leading scorer along the way, and it took her just over two years to get another 1,000 points, crossing the 4,000-point threshold on July 29, 2004, just before heading over to Athens to help USA Basketball to another gold medal.

Now we can jump ahead to the 2006 season. By this time, Leslie is a three-time Olympic gold medalist, a two-time WNBA MVP, and a two-time WNBA champion – oh, and two-time Finals MVP. 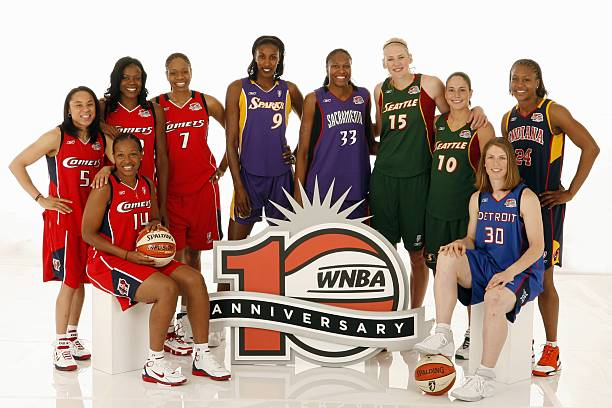 She entered the June 23, 2006, road game against the Sacramento Monarchs with 4,991 career points, just nine shy of 5,000. Averaging 22.3 points per game over her eight most recent games leading up to that one, nine points really seemed like a given.

Needing just nine points to get to 5,000 in her career, Leslie played just 18 minutes against Sacramento, scoring eight points in the Sparks win. That set up a major milestone opportunity for Lisa and the Sparks back home at Staples Center a couple nights later.

A little less than a year prior to this on July 13, 2005, Katie Smith scored 11 points for the Minnesota Lynx in a win over the Detroit Shock to become the first player to score 5,000 points in United States professional women’s basketball, combining her scoring totals from the WNBA and her time in the ABL winning championships with the Columbus Quest.

Some added intrigue: just a couple weeks later, the Lynx traded Smith to the Shock.

The Sparks home crowd got quite a show when the San Antonio Silver Stars came to town. 53 seconds in to the game Leslie scored off an assist from longtime Sparks teammate Mwadi Mabika, surpassing the 5,000-point mark and “sending the crowd into a frenzy,” as Michael Becker reported in the Los Angeles Times.

During the next timeout, Leslie was honored and presented with a game ball, which she handed off to her husband and mother, who were both sitting courtside.

That would be a great story on its own, but Leslie made it extra special: she poured in 39 more points, adding on 13 rebounds and 3 steals. On the night the big story was Leslie being the first to 5K, the second story was her career-high 41 points, and the third story was her being the first WNBA player to put up 40 points and 10 rebounds in a game. She’s still the only one to add three steals to that stat line.

You don’t have to overanalyze 41 points, but the way she got there was impressive:

Leslie wasn’t sure how to reflect on her career milestone and the WNBA history she made.

“I don’t know what to feel,” she was quoted as saying postgame in an ESPN story on the game. “I don’t feel great because there’s no one ahead of me to say, ‘That’s a good mile marker.’ But I’m happy if everyone’s happy.”

A lot of people were happy. Lisa Leslie was named WNBA MVP that year, the third (and would be final) regular season MVP honor of her career, tying Sheryl Swoopes at the time.

Two years and a day after that 5K game, she grabbed her 3,000th career rebound, also the first to that mark. Lisa went on to score another 1,223 points after that game, retiring after the 2009 season as the league’s all-time leading scorer with 6,263 career points.

Leslie became the mile marker in the WNBA in many ways.

21 more WNBA players have scored 5,000 career points, but only six have gotten their faster than Leslie’s 287 games.

(Pretty neat that Sparks teammates Leslie and Candace Parker got to 5,000 points in the same number of games.)

She’s the first of what is today just five players to score at least 6,000 points with one franchise:

Only seven WNBA players total have gotten to 5,000 points and 3,000 rebounds in their careers, starting with Leslie back in 2008.

Barring a Maya Moore return, it will be a while before the next WNBA player reaches 5,000 points, but it’s fitting (for now) that the next two in line are current Sparks players: Nneka Ogwumike (4,401 career points) and Kristi Toliver (4,313).