Twenty-five years in to the WNBA there are still frequent firsts: those special moments that are – even if briefly – unmatched. They both help contextualize a player, a team, a coach, or a game, and they can also make you pause to rhetorically ask “Really? ___ didn’t do that?!?”

To help celebrate this season, starting today I’m taking a look back every week in Friday Firsts, highlighting those memorable moments that broke new ground while tying them in to today’s WNBA.

I’m tipping off today with a player who is still breaking records and building an MVP résumé in a comeback season; we’re going back to 2010, the rookie season of Tina Charles, focusing specifically on July 7, 2010, when she made history as the first WNBA player to record a 20/20 game in their first year.

Sometimes you look back at a draft years later and realize teams passed on someone great or reached on a player who didn’t pan out. That’s not the case with Tina Charles. The Connecticut Sun selected her first in the 2010 WNBA Draft, and she hit the ground running.

Coming in to a team reshuffling a bit after trading All Star point guard Lindsay Whalen to Minnesota, the Sun struggled through injury, with Charles the immediate, consistent star in the frontcourt. She was the only Sun player to start in all 34 games, and she was relied upon to score.

In her first 17 games, Charles had 13 double-doubles with some absurd rebounding performances.

Perhaps the crown jewel of her rookie season came on July 7 against the Atlanta Dream. In 36 minutes she put up 27 points on 9-18 from the field and 9-11 from the free throw line, and she added on three offensive rebounds and 17 defensive rebounds for a total of 20 boards on the night.

The Sun walked away with the loss due to heroic performances from Angel McCoughtry (32 points and 10 rebounds) and Iziane Castro Marques (32 points and 7 assists) for the Dream, but Charles made history as the first WNBA rookie with 20 points and 20 rebounds in a game. 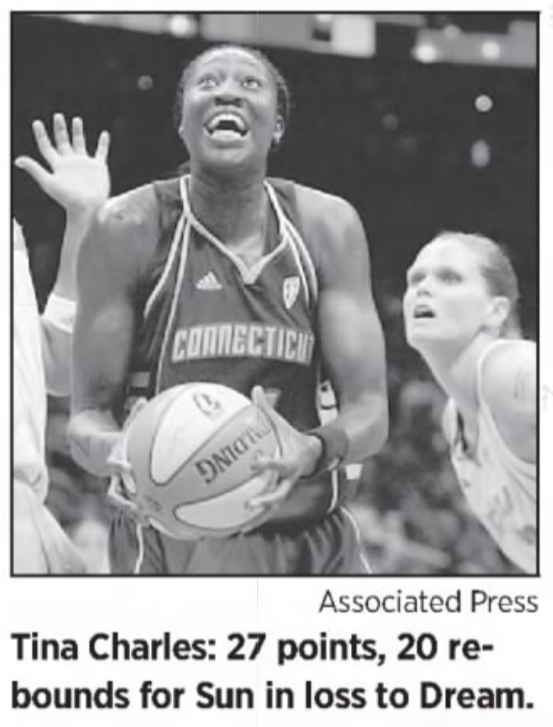 Blast from the past: Not only did Charles have the first rookie 20/20 game, it was just the 9th 20/20 game in WNBA history. It took until the league’s 6th season to see the first 20/20 game, when Natalie Williams had 22 points and 20 rebounds (with an evenly split 10 offensive rebounds and 10 defensive rebounds) in a win for the Utah Starzz. Williams is easily one of the most athletic players the WNBA has seen, a two-sport All-American at UCLA and a gold medalist with Team USA in 2000, and she is still top-15 all-time in rebounding percentage (17.5%). 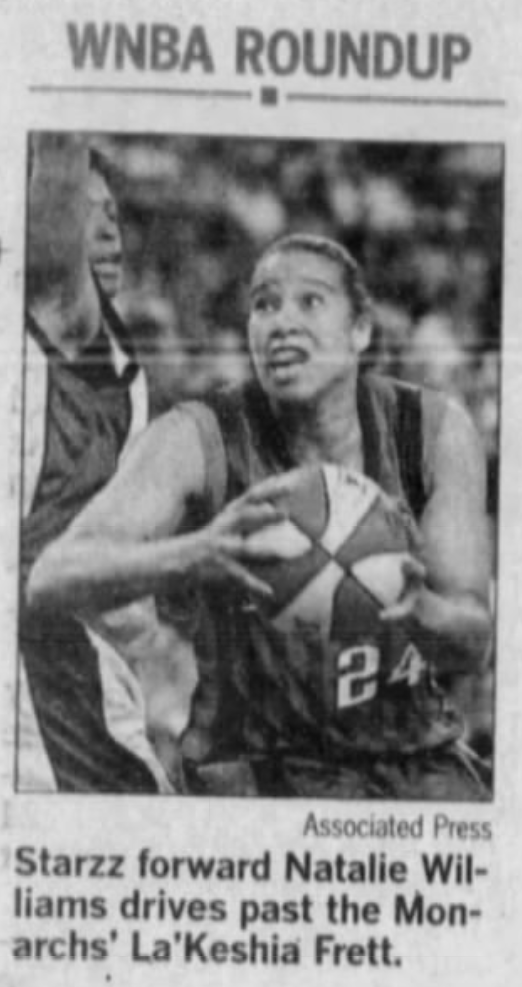 Charles was the first rookie to record a 20/20 game, and she remains one of just two to do it: in 2012, Nneka Ogwumike put up 22 points and 20 rebounds against the Indiana Fever to join Charles’ exclusive club.

When I think back on early WNBA players who dominated the boards, my mind always goes to Cheryl Ford, the 2003 Rookie of the Year. For true rookies, she established a first-year record with 15 double-doubles in the Detroit Shock’s worst-to-first season. Candace Parker upped that record to 17 in 2008 when she won Rookie of the Year and MVP, but Charles came along and blew both of those numbers away.

Closing out the second half of her rookie season with 9 double-doubles, Charles set a mark that has yet to even be threatened with 22 double-doubles. Not only is it a rookie record that still stands, it was an overall single-season record that has been beaten just once. By Tina Charles. The following year.

Her 23 double-doubles in 2011 (her second year) is still a league-best, and Charles has three of the top five season totals in WNBA history.

Blast from the past: Lisa Leslie had the league’s first double-double, recording 16 points and 14 rebounds in the WNBA’s first game between the Los Angeles Sparks and New York Liberty. Leslie was the league’s leader throughout her career, retiring with 157 total, until Sylvia Fowles passed her to become the new league leader in 2019.

Charles quickly established herself as the WNBA’s double-double machine. Through her first seven seasons (230 games) she had 129 double-doubles, averaging a double-double a little better than every other game. She was on pace to take over the league record before her rebounding numbers dipped from 2017 to 2019. 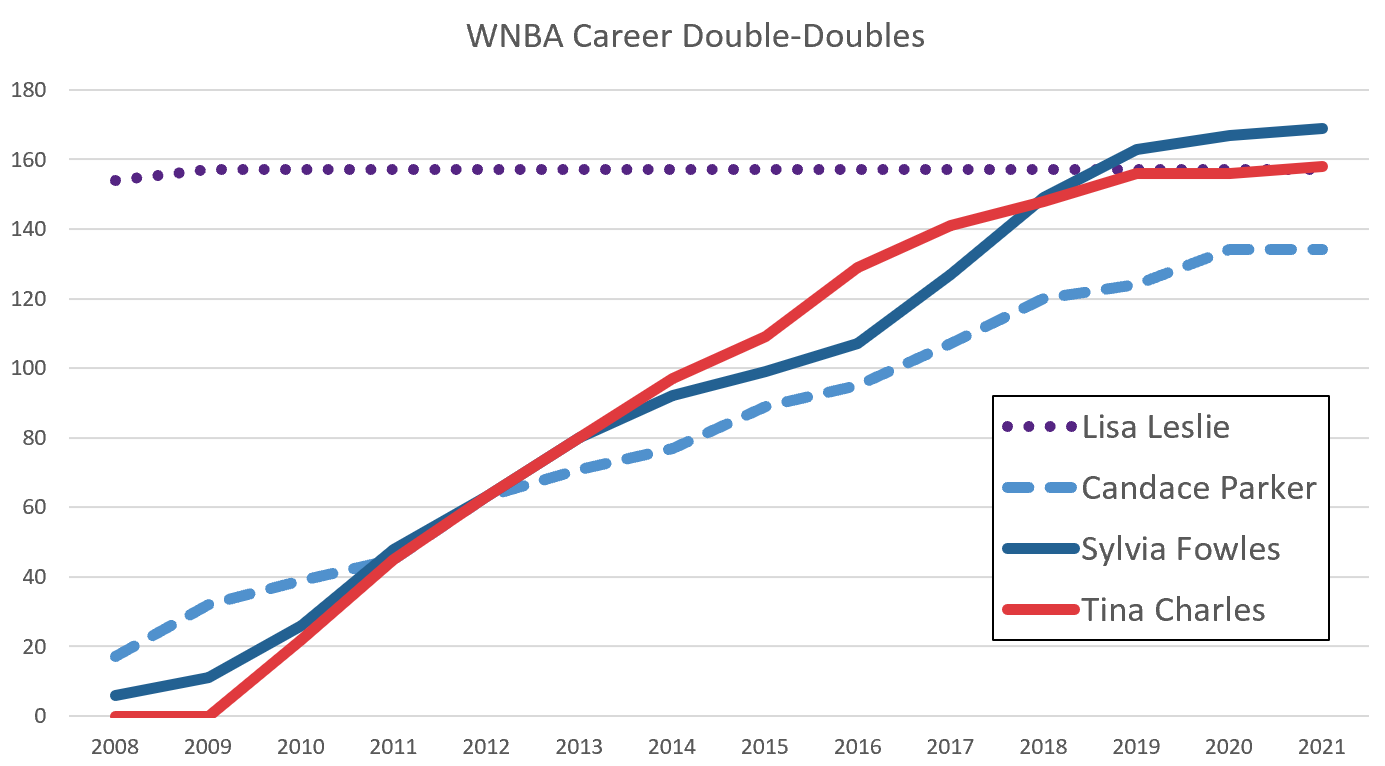 Charles’ down years corresponded with Fowles’ best years, including the 2017 Lynx championship and a combination MVP and Finals MVP for Syl. A rough couple of seasons playing in Westchester followed by a Charles-less 2020 season pushed Fowles – who had played about a season-and-a-half more than Charles – in to the lead, but now Charles is back.

Tina’s leading the league with 25.2 points per game with four 30-point games in nine outings. She’s added a pair of double-doubles to pass Lisa Leslie for 2nd all-time, and now it’s down to a battle between Fowles (169 double-doubles) and Charles (158) again.

The circumstances look similar to the start of Tina’s career, with Thibault on the sidelines coaching and Charles still proving she’s one of the best, but 11 years later she may not always be required to do as much, especially when fellow MVP Elena Delle Donne returns. However, Tina Charles showed us out of the gate with her rookie 20/20 game that she’s a productive multi-dimensional player, always ready to score, secure rebounds, and shatter records.

You’re going to want to keep up with Tina Charles and the history I discussed here, so here are some pages you may want to bookmark: