“Allie Quigley, for three!” is one of the most common calls in the WNBA, and in the back half of her WNBA career, her three-point scoring has only gotten better. She returned from the Olympic break with 5 made threes in the Sky win over the Storm, followed by 7 made threes in the loss to the Wings. That brought her up to 9 games with 5 or more made threes at the age of 30 or later, tying her with the league’s first epic scorer, Cynthia Cooper.

In the next game she has 5 or more threes, she’ll tie another WNBA original, Ruthie Bolton, with her 10th.

Bolton may not be a name fans immediately think of today when talking about the W’s best long-range shooters, but she’s the focus today for exactly that. Like many of the league’s first stars, she was already 30 by the time she played her first regular season game, and she took very little time to find her shooting rhythm.

In just her second game for the Sacramento Monarchs, Ruthie Bolton made 6 of 12 threes, the first time she made at least 5 threes in a game, a first for the WNBA overall.

Every Friday I’m diving in to a WNBA first in a series I’ve creatively titled Friday Firsts. If you missed the first six Friday Firsts posts, go back and check them out:

Ruthie Bolton wasn’t a prolific three-point shooter at Auburn, but the NCAA didn’t adopt the three-point line until partway through her college career. She only took 16 threes in college, but to the credit of her shooting ability, she made half of them.

That was right on par with her overall 51.1% shooting from the field in Auburn, and she carried that shooting as an asset of her game, particularly with USA Basketball throughout the 1990s. In the 1994 World Championship, she shot 51.9% from the field and matched that from long distance, making 14 of her 27 three-point attempts, and though her percentage dropped by the 1996 Olympics, she still led Team USA with 15 made threes over 8 games, more than two times as many makes as any other players. She only trailed Jennifer Azzi in three-point percentage, but Azzi only took 6 threes making 4 of them. 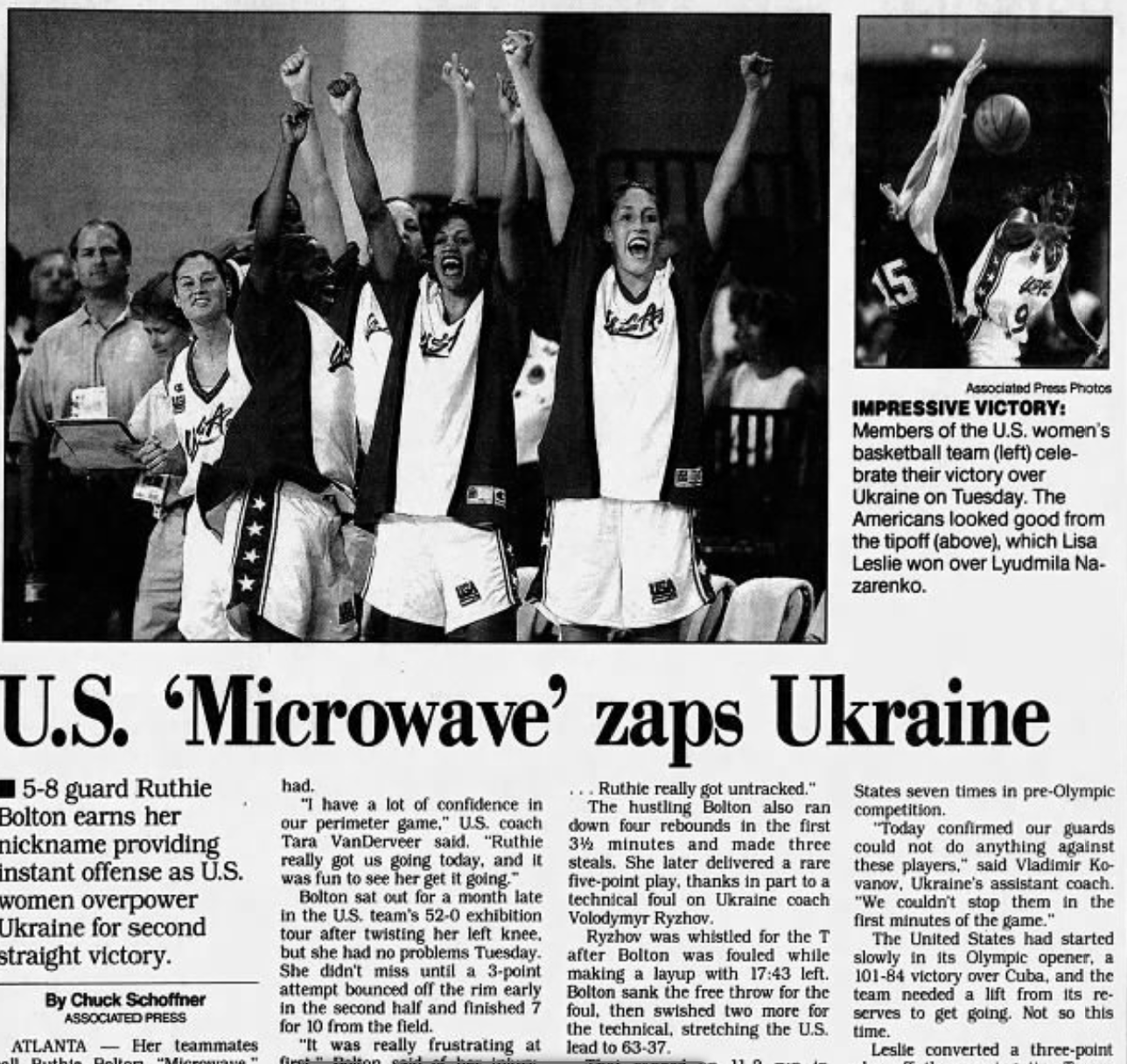 “I have a lot of confidence in our perimeter game,” VanDerveer told reporters after a blowout win over Ukraine in which Bolton had 21 points. “Ruthie really got us going today, and it was fun to see her get it going.” 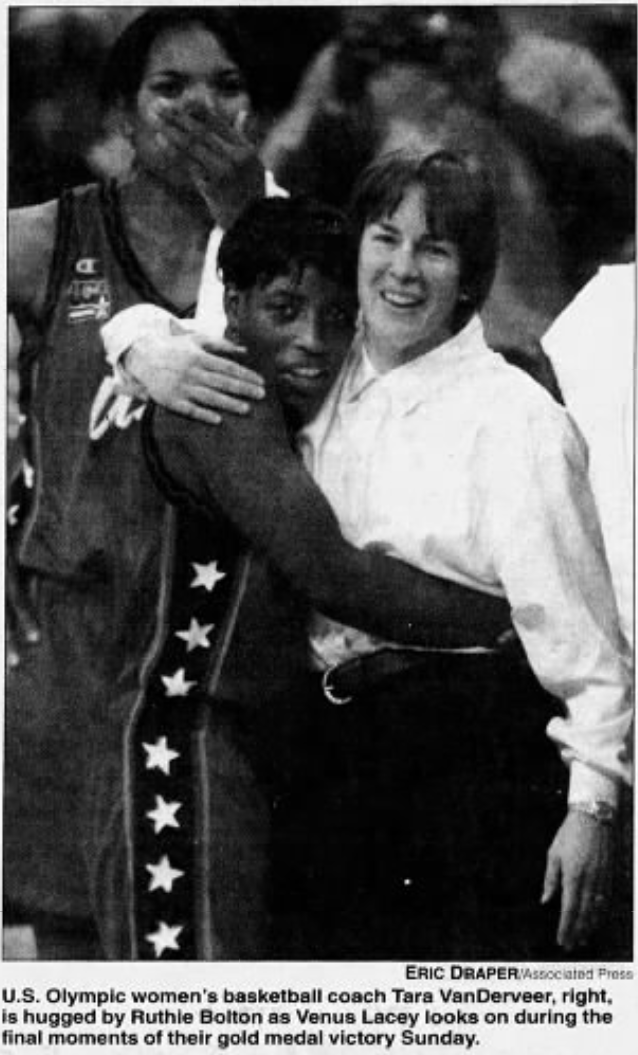 Of course, Bolton was often celebrated for her defensive prowess, and she led the team by a wide margin in that way as well. She had 23 steals over the course of the 1996 Olympics. Next closest was Sheryl Swoopes, who had 12. She held the perimeter down while the likes of Katrina McClain, Lisa Leslie, and Venus Lacey owned the post. After locking down “Magic Paula” in the gold medal game, Bolton walked it off with a classic line.

“If she had gone to the bathroom, I would have gone with her,” she told reporters of her stifling defense.

Bolton rode that momentum in to the WNBA, where she joined fellow USA Basketball teammates Rebecca Lobo, Lisa Leslie, and Sheryl Swoopes among the few to opt for the WNBA over the ABL.

Early in 1997, Bolton was allocated to the Sacramento Monarchs alongside Bridgette Gordon, and she stuck with the Monarchs throughout her 8-year WNBA career.

It took a few seasons for the Monarchs to shore up their roster and find their footing in the WNBA, but Bolton took no time to settle in to her game.

Bolton finished 5th in steals per game with 2.25 in 1997, but she blew the league away with her volume three-point shooting. She took 8 shots per game from outside the arc, more than 2 more than next in line: Cynthia Cooper (5.8) and Michele Timms (5.3). While she wasn’t the most accurate shooter, she made 34.4% of her threes that year, good for a league-leading 2.8 made threes per game.

Bolton’s high volume shooting stood out in a league not prioritizing the three like we see today. For perspective, while Bolton attempted 8 threes per game, the Cleveland Rockers as a team only averaged 6.3. The Los Angeles Sparks barely topped Bolton’s number, averaging 8.6 three attempts.

Looking at the WNBA’s all-time single-season leaders in three attempts per game, Bolton stands out in a sea of Diana Taurasi and Katie Smith, both forging a career on elite shooting, the former years after Bolton had retired.

In that sense, it’s not too surprising Bolton was the first player to make 5 threes in a game. On a team desperate for scoring – the Monarchs were in the lower half of the league in points per game, field goal percentage, and offensive rating – Bolton was called on to make shots even more often than the league MVP, Cynthia Cooper, who was flanked by Tina Thompson and Janeth Arcain, with the benefit of bringing Sheryl Swoopes in later.

After a down shooting game to open her WNBA career (4-16 from the field and 6-8 from the line for 16 points against the Utah Starzz), Bolton tried to do whatever it would take to get the home opening win against the New York Liberty. That’s when she made history.

Despite a disappointing 73-62 loss to the Liberty, Bolton recorded the first game in WNBA history with 5+ threes. She followed that up by securing the Monarchs first home win three days later over the Sting with 5 made threes (on 11 attempts). She added a third game with 5+ threes a couple weeks later when she finished 5-15 against the Rockers.

A little over a week later, Cynthia Cooper caught fire from distance, making 6 of 8 threes, and the eventual MVP kept that up. By the end of the inaugural season, Cooper led the league in games with 5 or more threes, just ahead of Bolton.

Bolton’s defense traveled with her to Sacramento just as well. Bolton’s 1997 season is one of just 5 in league history with 5+ attempted threes and 2+ steals on average.

To this day, she remains the only player in league history to average at least 2.5 made threes and 2 steals over the course of a season (1997).

Big three-point performances have become more of a norm as the years have gone on, and over time the Monarchs developed a roster with even more great talent on both sides of the ball, including Ticha Penicheiro, Yolanda Griffith, and Kara Lawson, so Bolton was tasked with less responsibility to carry the team over the finish line.

She has fallen out of the top 25 in career threes, but she’s still near the top in single-game three-point performances. Entering today, she is 5th in number of games with 5 or more made threes at the age of 30 or later, with Allie Quigley looking to pass her any day.

Really interesting to see the two Katies side-by-side, two players noted over their careers among the best in terms of both shooting and perimeter defense. Though her career isn’t encapsulated in the Top WNBA Players lists in the same way the likes of Taurasi, Hammon, and Smith are, a compelling argument can be made that Katie Douglas is right near the top in that category.

As is Bolton, who was already on the back half of her professional career when the WNBA came to be, like so many others who led the league early. A franchise in a better position to succeed early and/or the existence of a WNBA even just a few years earlier, and Bolton’s career numbers could easily be up there with the likes of Taurasi or Hammon.

Regardless, she’ll always be among the firsts.

Ruthie’s whole story goes far beyond any stats or records: