Every Friday I’m diving in to a WNBA first in a series I’ve creatively titled Friday Firsts. If you missed the first Friday Firsts post, go back and check out the details on Tina Charles recording the first rookie 20/20 game in the WNBA.

Today I’m going back to one of the league’s original players, and her name has popped up in NBA discussion again just this week since I started planning this. Though now Teresa “T-Spoon” Weatherspoon is still making history as a former WNBA player now on an NBA coaching staff (and being discussed as a candidate for a NBA head coaching job), I’m going back to June 5, 2002, when she became the first player to log 1,000 career assists in the WNBA.

Let’s start at the beginning: not only was Weatherspoon one of the league’s original players, she was in the first WNBA game, starting at guard for the New York Liberty wearing the #11. She carried that number over from her days playing at Louisiana Tech, where she won an NCAA championship as a senior in 1988. Though she didn’t have the first league assist, an assist was her first league stat, and it didn’t take long.

She was off and running from there. She only scored 3 points, but it was a typical Weatherspoon game with 10 assists and 4 steals.

10 assists was a high bar to set for a WNBA debut game. Since then, only three other players have had double-digit assists in their first WNBA games:

She didn’t stop there, adding a couple more double-digit-assist games in 1997, and then early in the 1998 season she set a new career high and New York Liberty single-game record with 13 assists in a 92-77 win over the Los Angeles Sparks.

You’ve seen “The Shot,” right? Make sure you’ve seen it:

By the end of the 2002 season, she had 18 regular season games with 10 or more assists, which would end up being her final career total. It was within that 2002 season that she notched her historic 1,000th assist…

Weatherspoon led the league’s inaugural season with 6.2 assists per game for a total of 173 over 28 games, more than an assist per game more than the next-closest player (Penny Toler, 5.1 per game).

In 1998, a new rookie entered the WNBA and very quickly started challenging (and surpassing) those single-game assist marks: Ticha Penicheiro was drafted to Sacramento out of Old Dominion, and she took no time to get going. As Ticha put up some absurd assist numbers (including what was a long-standing single-game record of 16 assists, first on July 29, 1998), the race was on at the top of the WNBA career assist standings.

On July 29, 1998, rookie Ticha Penicheiro had a WNBA single-game record 16 assists, but she didn’t care: 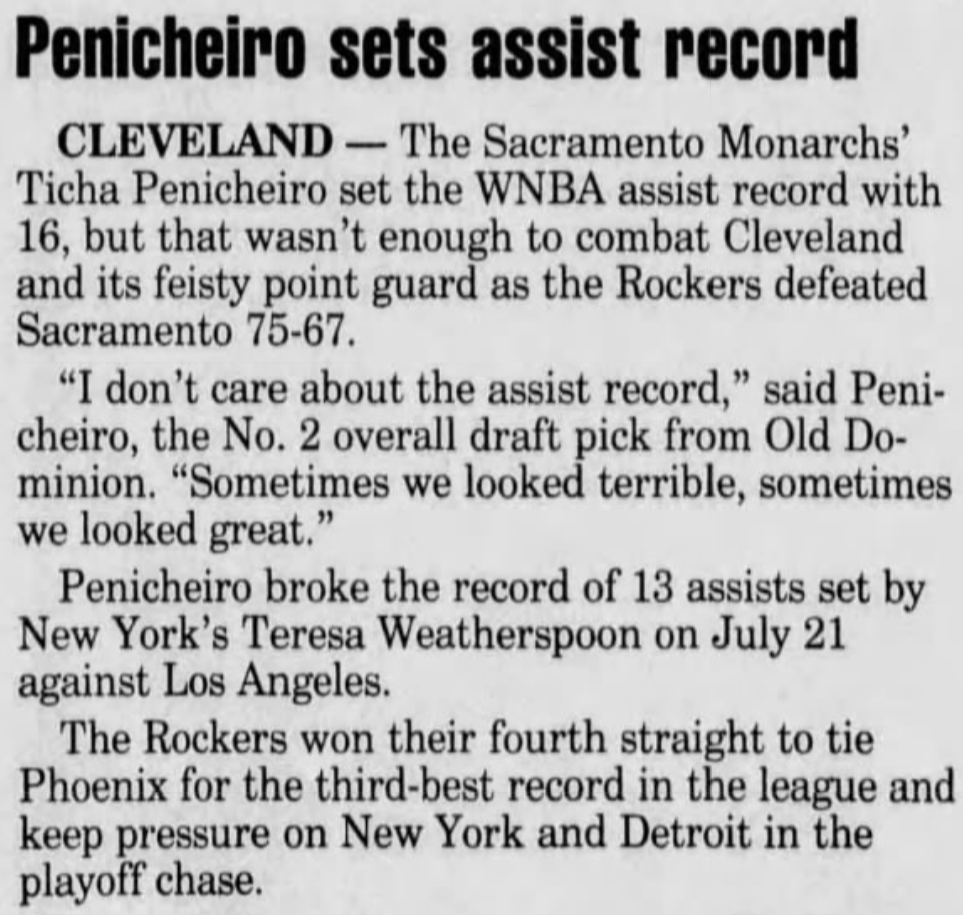 Who knows how different history may have been if Penicheiro hadn’t missed several games at the start of the 2001 season due to ankle injury and several games in the 2002 season with a shoulder injury? We can be sure about the history that was made:

Teresa Weatherspoon entered the June 5, 2002, game between the New York Liberty and Detroit Shock with 999 career assists. The Shock were winless while the Liberty had opened their season 3-1. The game started slow, but just under four minutes in to the first half the Liberty scored their first points on a Crystal Robinson three off a Teresa Weatherspoon assist, officially marking the 1,000th assist of Weatherspoon’s career, making her the first player to reach that milestone. 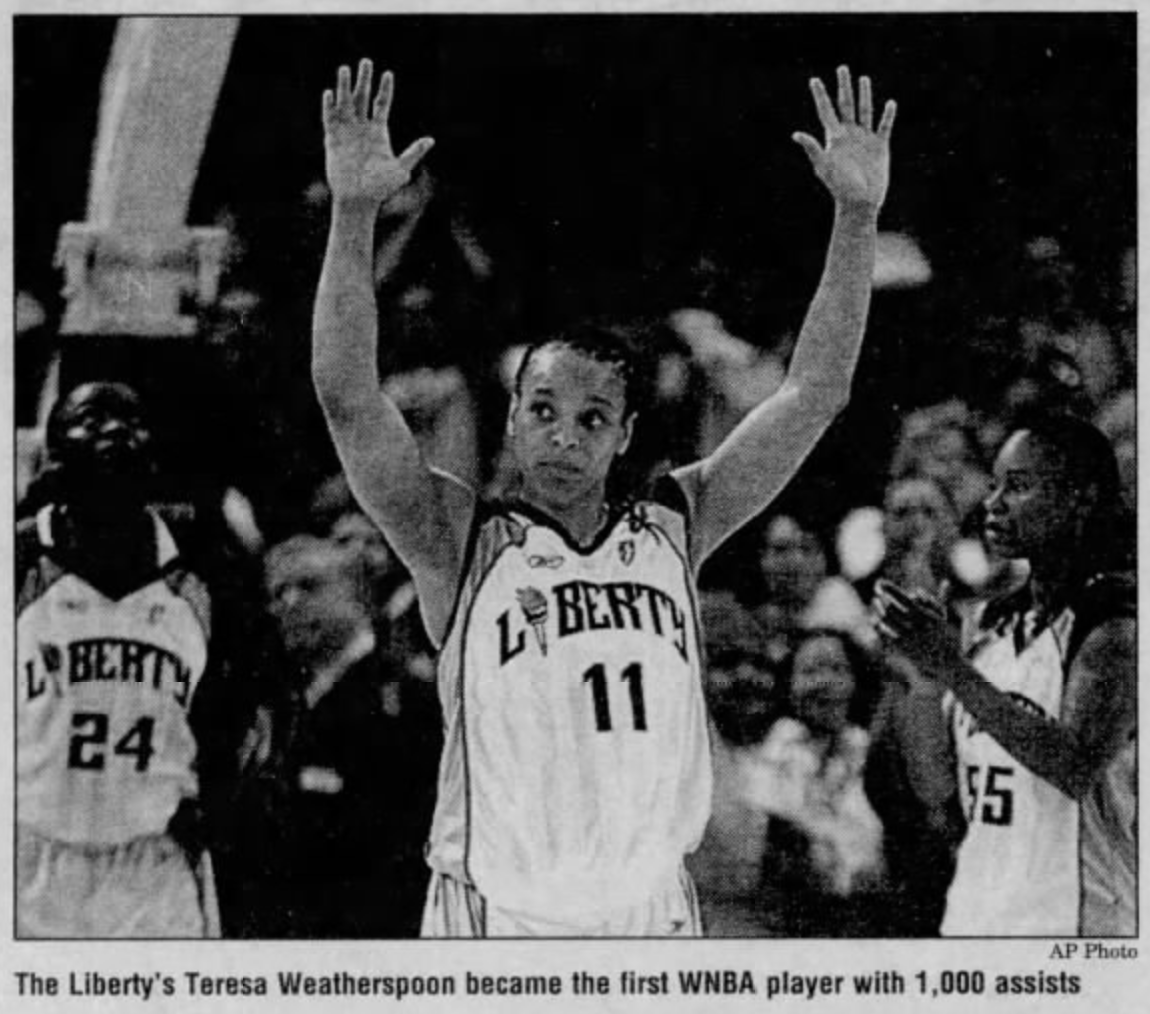 On July 1, 1999, the New York Liberty beat the Phoenix Mercury 83-67 on Crystal Robinson’s perfect 5-5 from three-point range. At the time she and Andrea Lloyd (Minnesota Lynx) were the only two players to make at least five threes in a game without missing any.

Her former teammate in the ABL, Edna Campbell, was on the losing side of that game and praised Robinson’s shooting ability in a quote in the Arizona Republic: “That’s Crystal Robinson for you. All she needs is a little bit of space and she’s going to knock it down. Those were back-breaking shots for us.”

Robinson, who was drafted to the Liberty before that season after the ABL folded, spoke about the difficulty getting comfortable not only with a new team but with a new ball. The ABL – where Robinson was the most accurate three-point shooter – used a larger men’s basketball. Per an article from the Daily News (NY), Robinson said “The ball is so small, sometimes I have a hard time catching it and turning to shoot.”

Less than two months after “T-Spoon” got to 1K, Penicheiro hit the milestone herself. It would take another two years before another WNBA player hit the mark, when Dawn Staley got her 1,000th assist on September 1, 2004. A total of 29 players have recorded 1,000+ assists in the WNBA. Penicheiro remains the fastest player to get to that mark (134 games), with Weatherspoon next (159), followed by Sue Bird (179), Staley (188), and Courtney Vandersloot (196).

From the mid-2000s until the 2017 season, Penicheiro took over the top of the WNBA’s assists leader board, finishing her career with 2,599 (per the WNBA). Sue Bird passed her up on September 1, 2017, with a 13-assist performance against the Washington Mystics. Bird will likely be the first player to hit the 3,000-assist mark, on pace to get there before the Olympic break this year with 2,972 as of the time this goes out.

Playing at the start of the WNBA (when schedules were shorter) when she was already 31 meant Weatherspoon’s career comprised fewer games than most of the other career leaders, but her per-game average still holds up as fourth-best all-time:

She’s also still 4th in assist percentage, an estimate of percentage of their team’s field goals a player assisted on while on the floor:

Beyond assists, Weatherspoon was noted for her defense perhaps just as much. She remains the only player in the top six all-time in the WNBA in both assists per game (5.3, 4th) and steals per game (1.8, 6th).

“T-Spoon” was one of the league’s first players, still has the most iconic in-game moment in league history in “The Shot,” and regardless of the incredible assist numbers players like Bird and Vandersloot are still logging each game, she’ll always be the first to 1,000. She’s a Naismith Hall of Famer now, and I better send this off and get back to Twitter; she may have made NBA history in the time I wrote this.

Some relevant links for today: