Every Friday I’m diving in to a WNBA first in a series I’ve creatively titled Friday Firsts. If you missed the first four Friday Firsts posts, go back and check them out:

On July 4, the Las Vegas Aces got a big 118-95 win over the Atlanta Dream, matching the second-largest point total in a regulation WNBA game. It’s the most points scored in a non-All-Star game since September 7, 2016, when the Washington Mystics had 118 in a win over the Chicago Sky.

That gave me a great opportunity to talk about a big milestone in Aces franchise history – and more importantly, WNBA history. Back on June 23, 1997, in the league’s fifth game, the Utah Starzz (the original franchise that has since moved a couple times to become the Aces) beat the Los Angeles Sparks 102-89 to record the first 100-point game in league history.

The WNBA didn’t get off to the hottest start offensively. Through the first four games, the team scoring high was 76 points. The teams who would end up being the top teams in the East (Houston Comets) and West (Phoenix Mercury) hit that mark in their first games, both wins. And if that seems low, consider that 76 points was above both teams’ season averages.

Looking back at the 1997 season scoring averages now, you might expect that the matchup between the Los Angeles Sparks and the Utah Starzz would favor the Sparks, and when the met up in Utah for the first game of the league’s third day, that’s how it started.

A little over 12 minutes in to the first half, Lisa Leslie had 14 points of her own, putting the Sparks up 35-18 on the struggling Starzz. But just six seconds later, Wendy Palmer hit a three off a Deborah Carter assist to start the comeback. Palmer had 15 points in the 32-14 run to close the first half, putting the Starzz up 50-49. 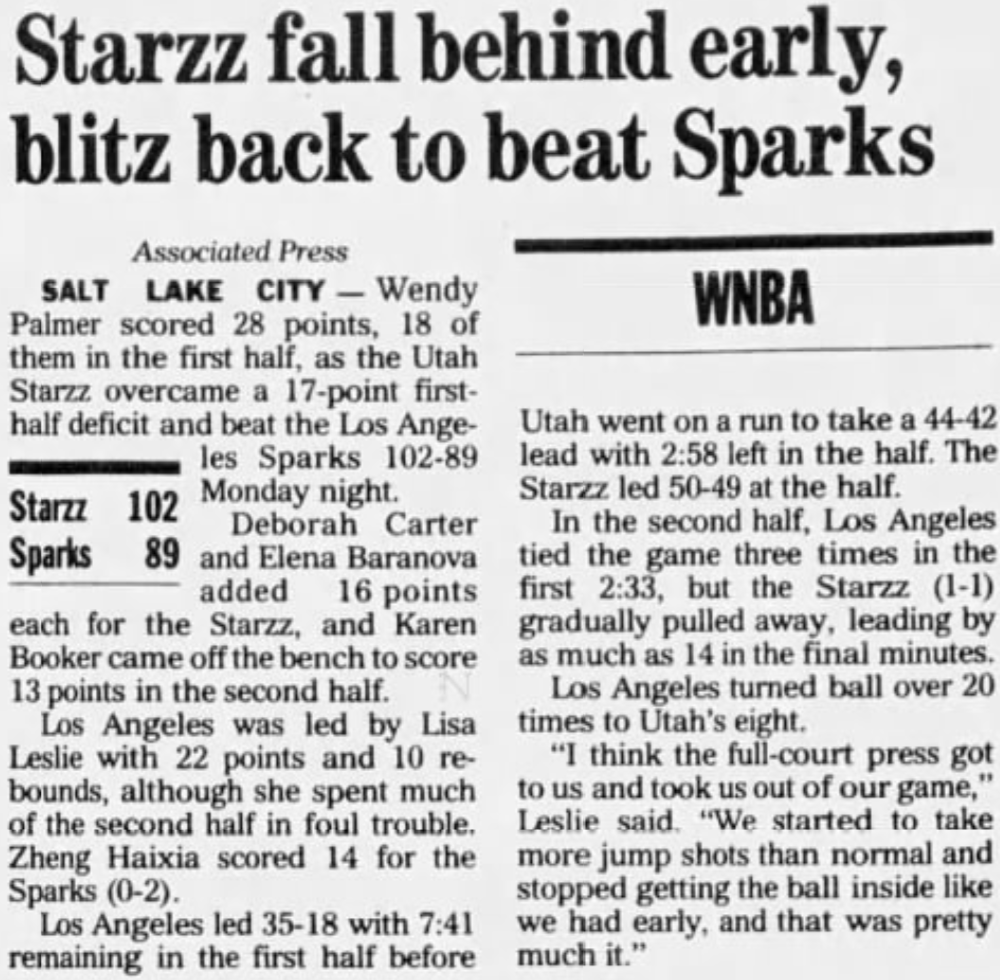 Palmer finished the comeback win for the Starzz with a game-leading 28 points (7-17 FG and 12-18 FT) along with nine rebounds. Her 28 points would remain a league record for a couple weeks, but her 12 made free throws (and 18 attempted) contributed to two league records that still stand today; as a team, the Starzz made a league record 42 free throws on a record 56 attempts. No team has matched Utah’s 56 attempts since, while the Washington Mystics (July 20, 2007) and Phoenix Mercury (July 1, 2011) have also made 42 free throws in a game since. 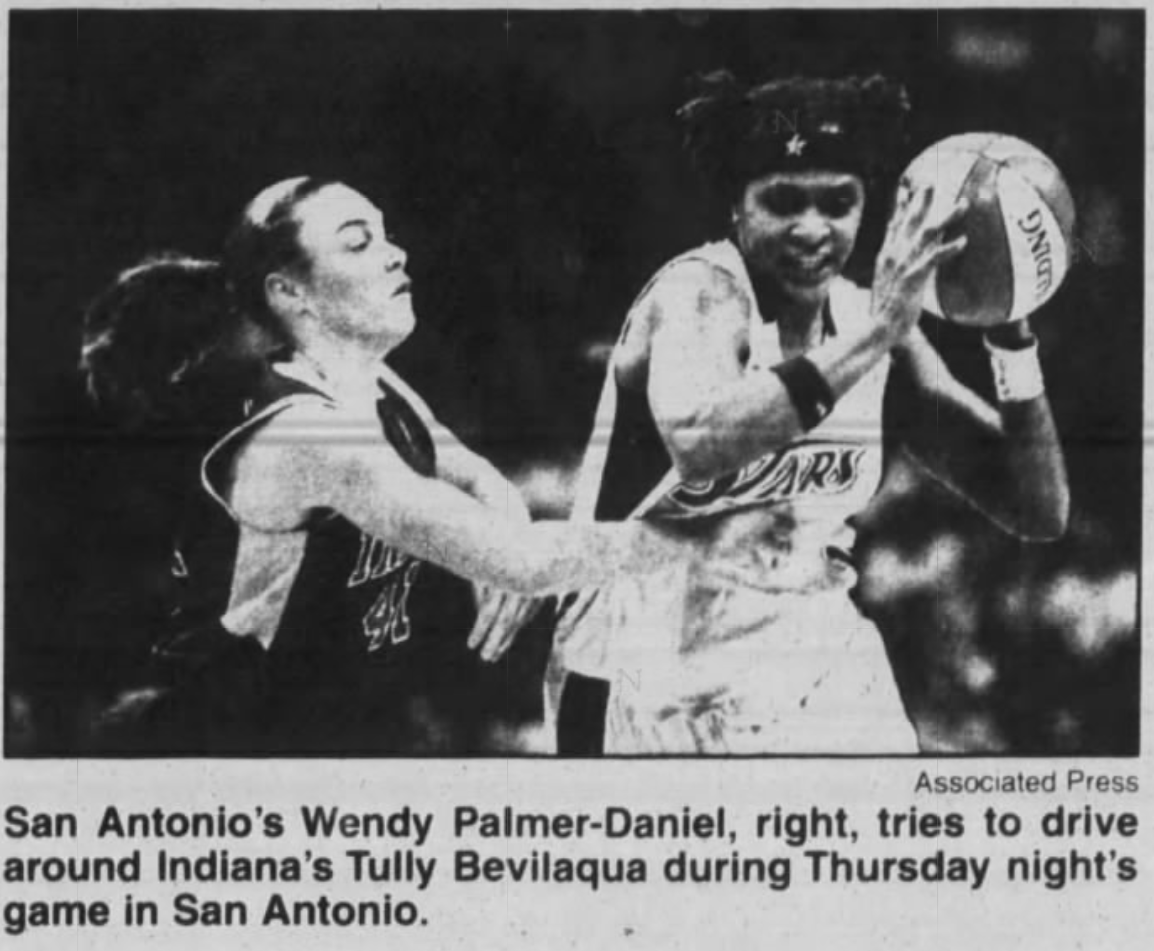 Palmer’s WNBA career took a winding path, from Utah out to the Detroit Shock before playing for the Orlando Miracle (and subsequently, the Connecticut Sun when they relocated) where she was named Most Improved Player in 2004. She returned to her first franchise in 2005, this time as the San Antonio Silver Stars.

Perhaps the biggest star of that Starzz win on June 23, 1997, was Elena Baranova, the WNBA’s first great 6‘5 Elena. She finished the win with 16 points, 10 rebounds, five assists, and five blocks, the first player with a 15/10/5/5 game in the W. It would take three years for anyone to match that stat line, and it was a Utah center once again; Margo Dydek had 17 points, 10 rebounds, five assists, and five blocks in a Starzz win over the Seattle Storm on July 1, 2000. Only six other times has a WNBA player had a 15/10/5/5 game since.

Elena Baranova was a star for the Russian team in the 1990s, winning gold with the Unified Team in 1992. Though she wasn’t as prolific a scorer as some of the WNBA’s all-time greats, she’s right up there as one of the league’s most versatile and effective. She’s one of just three players to play in the WNBA and average 10+ points, 5+ rebounds, a steal, a block, and a three per game: 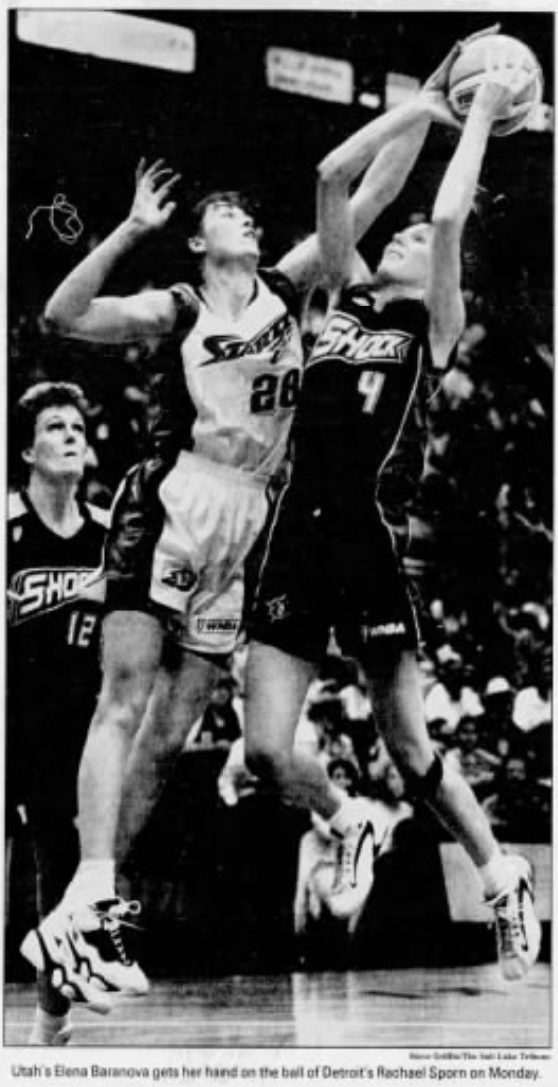 Though the first 100-point game came on just the third day of the WNBA’s first season, it took over a year for the next 100-point game to come around, when the defending champion Comets beat the expansion Washington Mystics 110-65.

It took until 2007 for 100-point games to become a regularity, and you can see the ebb and flow of their frequency in the game around rule changes moving the three-point line back (before the 2004 season and before the 2013 season). League scoring then catches back up, and 100-point games follow suit. 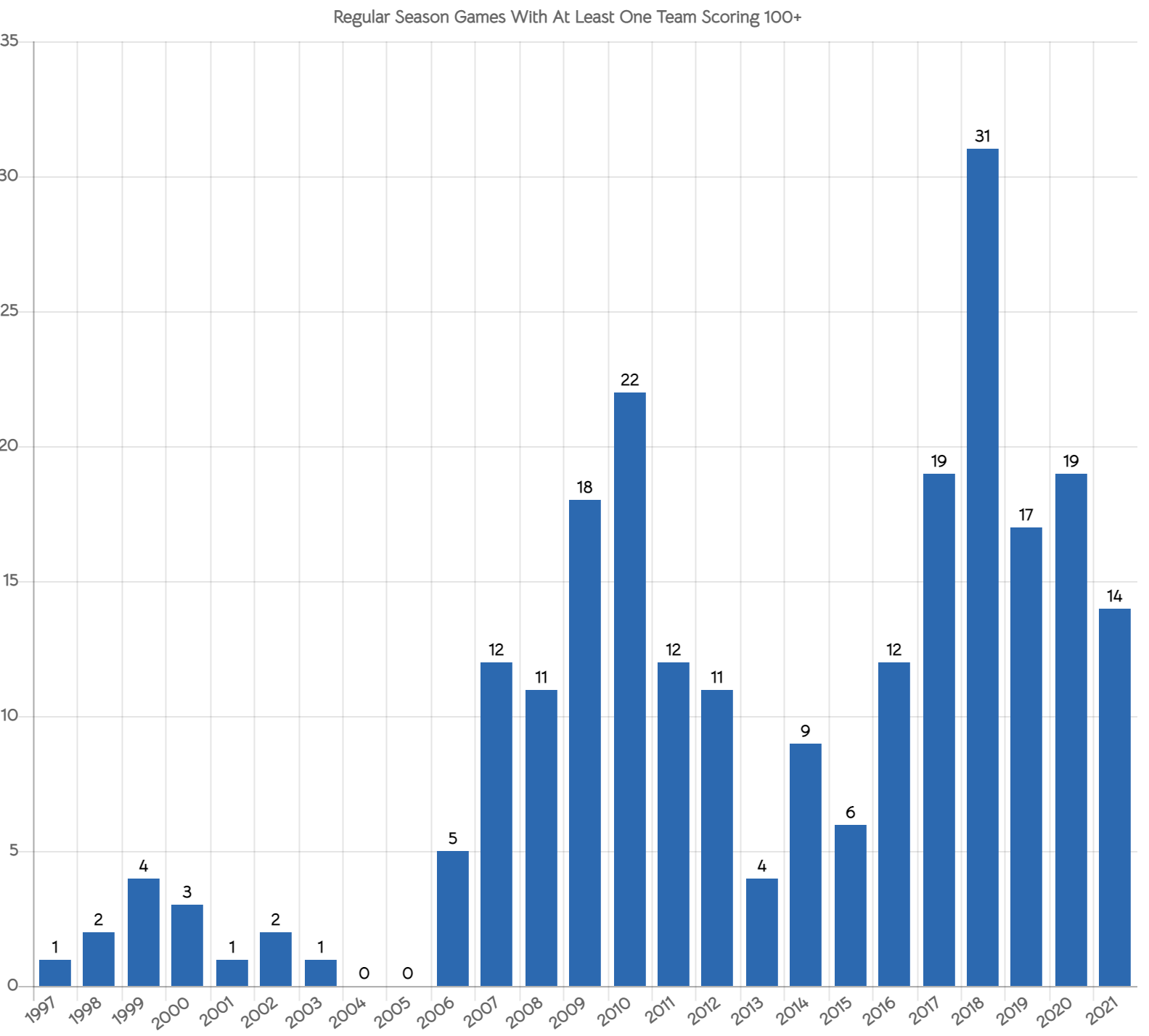 It’s still incredibly rare for both teams to score 100 or more in the same game. 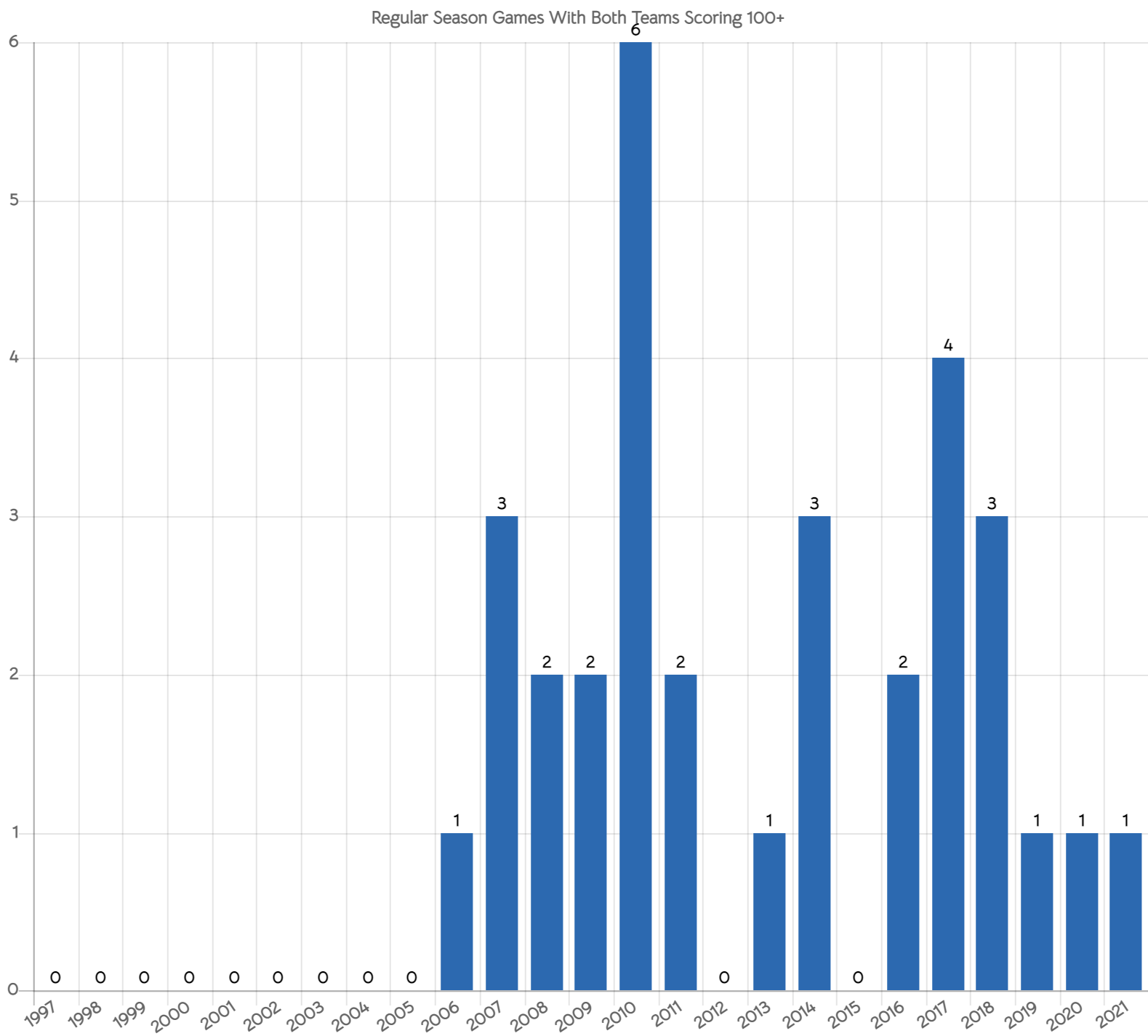 The 2021 WNBA season is on pace for third-largest proportion of regular season games finishing with at least one team scoring 100 points or more. 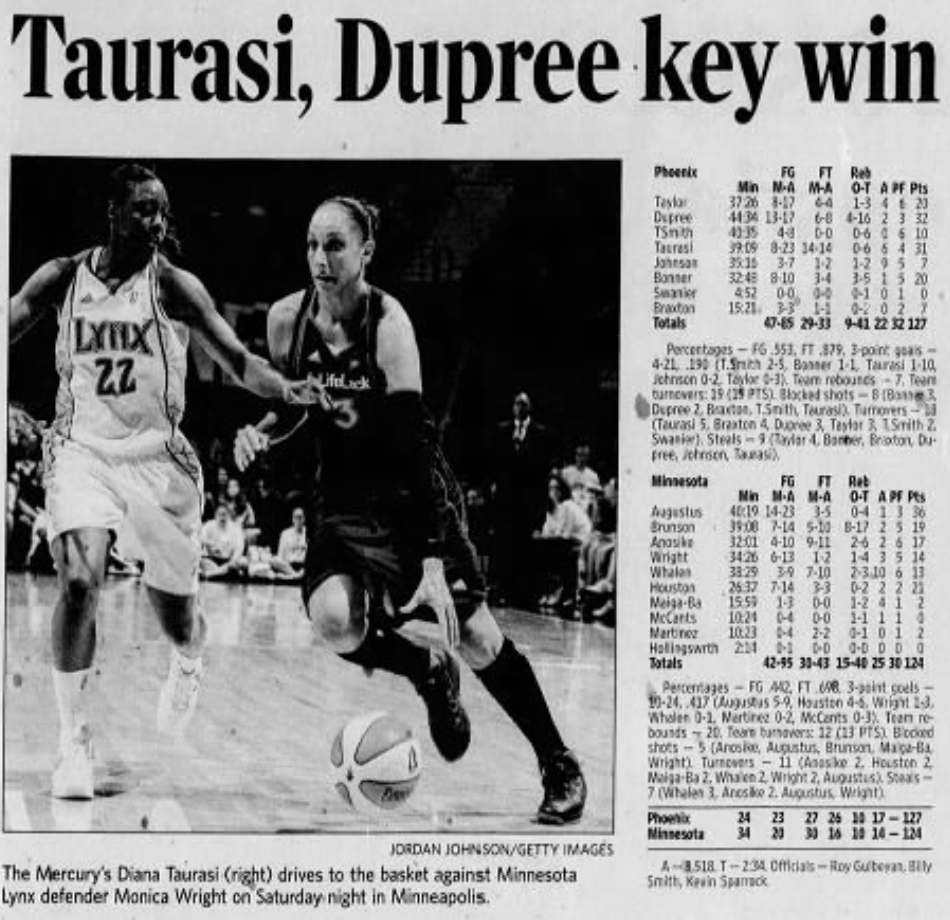 On July 24, 2010, the Phoenix Mercury beat the Minnesota Lynx in double overtime, setting league records for points in a game (127 by the Mercury) and combined points (251 total).

Six players scored 20 or more points, a single-game record that has been matched twice since but never broken: