Every Friday I’m diving in to a WNBA first in a series I’ve creatively titled Friday Firsts. If you missed the first three Friday Firsts posts, go back and check them out:

Tuesday night, the Connecticut Sun took on a depleted Washington Mystics squad, and while the Sun win was expected, some of the rebounding numbers were staggering:

Not only did Jonquel Jones outrebound all six Mystics players combined, she did so in just 27 minutes played. She didn’t play any of the fourth quarter.

The only other player in WNBA history to outrebound their opponent in a game is Yolanda “Yo” Griffith, who became the first (and no longer the only) player to do so back on July 22, 1999, when she had 19 rebounds compared to the New York Liberty’s 18 total. We’re talking about Yo today.

Newcomer of the Year

“Newcomer” is a tag that stuck to Griffith through a long stretch of her career, but not because she didn’t prove to be an elite player at every stop.

Coming out of Carver High School in Chicago, Yo was constantly putting up big numbers that would foretell a long professional career as one of the world’s best post players:

In a close loss to South Shore, she had 16 points, 16 rebounds, and 5 blocked shots, and then the next season in a rout of that same team, she had 35 points and 16 rebounds.

“It just comes to me,” she told the Chicago Tribune during her senior year. “When I get the ball, if I’m open, I shoot it. If I miss, I go in for a rebound and get it and throw it in again. That’s all.” 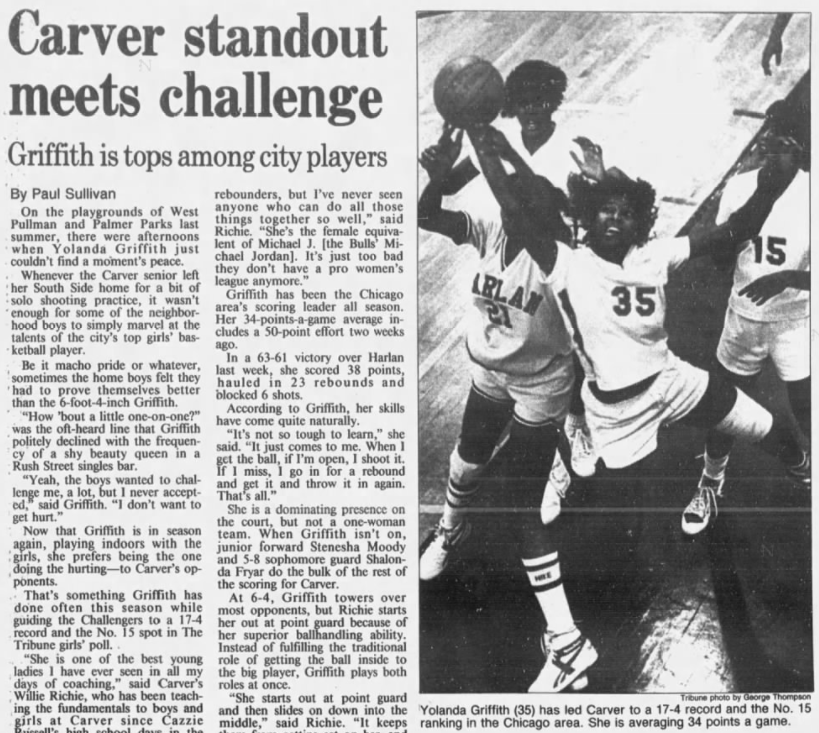 She finished her final year at Carver averaging 35 points, 17 rebounds, 7 assists, and 7 steals.

Along the way she committed to play for C. Vivian Stringer at Iowa, a program that had escalated to the top of the national rankings, finishing in the NCAA Elite Eight after just a few years of Stringer’s guidance.

But things didn’t go smoothly for the newcomer to college. Griffith was ruled ineligible to play in her first year after scoring too low on the ACT entrance examination, and not long after, she found out she was pregnant and returned home to Illinois to be with her family as she began the next phase of her life with her daughter, Candace.

She never gave up on basketball, though. She had initially decided to return to college to play at nearby DePaul, but after realizing she would have to sit out a year first, she chose a new path: junior college in Florida.

It took no time for the newcomer to get right back at it at Palm Beach Community College (PBCC): 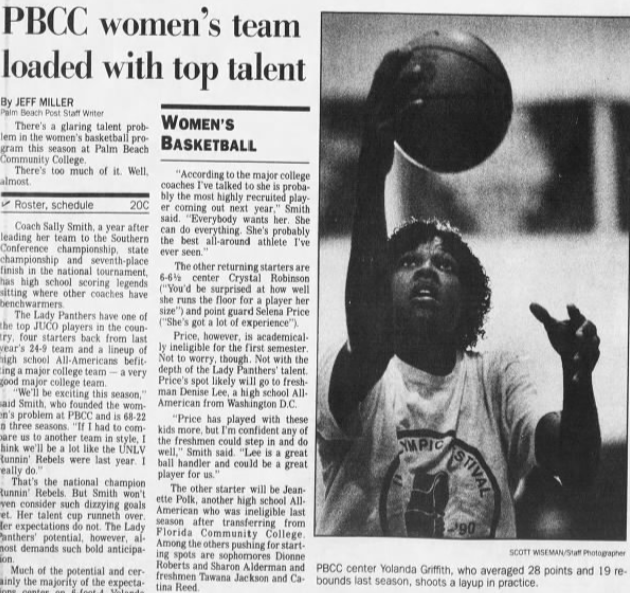 After dominating at PBCC again in her final season (27.9 points and 20 rebounds per game), Griffith was more than ready for the next level, and she had initially considered national powerhouse Western Kentucky, but she instead decided to stay in the area and play at Florida Atlantic University (FAU), opting for what she thought was best for her daughter.

“I had an apartment in Palm Beach already and my daugther was settled,” Griffith told the Hartford Courant in 1997. “It was convenient for me because I had a lot of friends there who helped me with my daughter.”

Once again, the newcomer had no trouble:

FAU played at the Division II level at that time, but they faced off against many Division I teams, including up-and-coming University of Florida led by head coach Carol Ross, who was just starting to turn that program around at the start of her long coaching career in the SEC and eventually at the WNBA level.

Griffith led FAU to the big win with 38 points and 15 rebounds, and Ross, who played for a good Ole Miss team in the late 1970s and was an assistant at Auburn through some of their best years in the 1980s, was more than impressed. 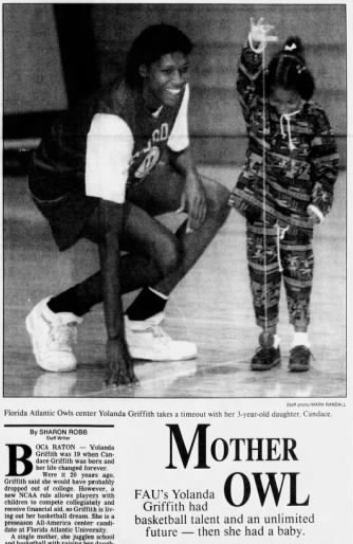 Griffith was Division II Player of the Year in her season there. Her 46 points in a game against West Georgia is still an FAU single-game record, and both her 28.2 points per game and 16.0 rebounds per game are still single-season program records.

Still, Griffith stayed out of the American spotlight as she headed over to Germany to play professionally. After a few years overseas, she returned to the United States and a completely different landscape for professional basketball. She opted to play in the American Basketball League (ABL), the direct competitor to the WNBA, which had also just launched.

You know the drill: being a lesser-known newcomer was no problem for Griffith. She was the top pick by the Long Beach StingRays in that year’s ABL Draft, just ahead of Ross’s star Florida Gator, DeLisha Milton, and the numbers were nothing new for Yo:

Earl Gustkey described her play well in a piece for the Los Angeles Times:

A typical Griffith play occurred recently against Colorado. Coming out quickly from the low post, she blocked a jump shot at the free-throwline softly enough to secure the ball in both hands and then started a fastbreak.

Among the big players in the women’s game, no one can match her combination of hand and foot speed. At either end, seh can get to a spot in a heartbeat. Defensively, in the low post, interior passing by opponents simply isn’t permitted. 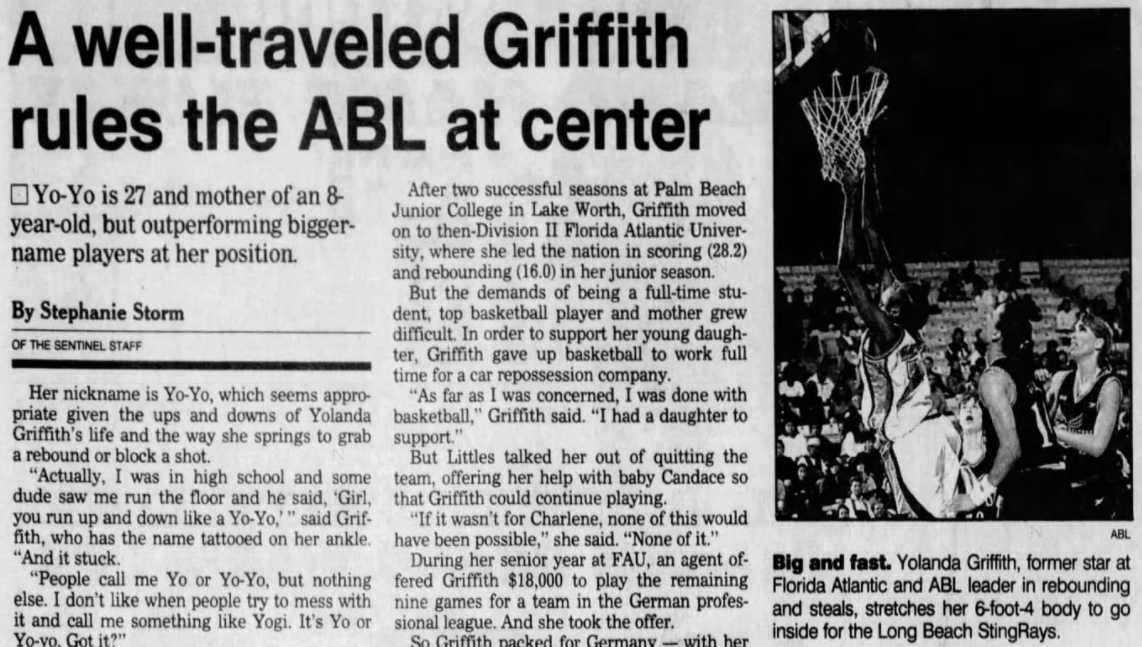 Leading StingRays to a Finals loss to the Columbus Quest in five games, she finished second in MVP voting for the ABL that year, behind UCLA great and Portland Power star Natalie Williams, and their names became inextricably linked from there. Williams requested a trade, ultimately resulting in a three-team deal that sent Williams to Long Beach and Griffith back home to Chicago to play for the expansion Chicago Condors.

Griffith continued to dominate the boards, setting an ABL record with 25 rebounds (16 defensive) shortly before the ABL disbanded partway through the season in 1998. The ABL players flocked to the WNBA to find a landing spot playing professional basketball. Griffith was no longer an unknown in the United States, and she reunited with her Long Beach head coach Maura McHugh, who was brought in as an assistant to Sonny Allen, head coach of the Sacramento Monarchs. Drafted No. 2 behind Chamique Holdsclaw, Griffith was a newcomer once again, this time in the WNBA. 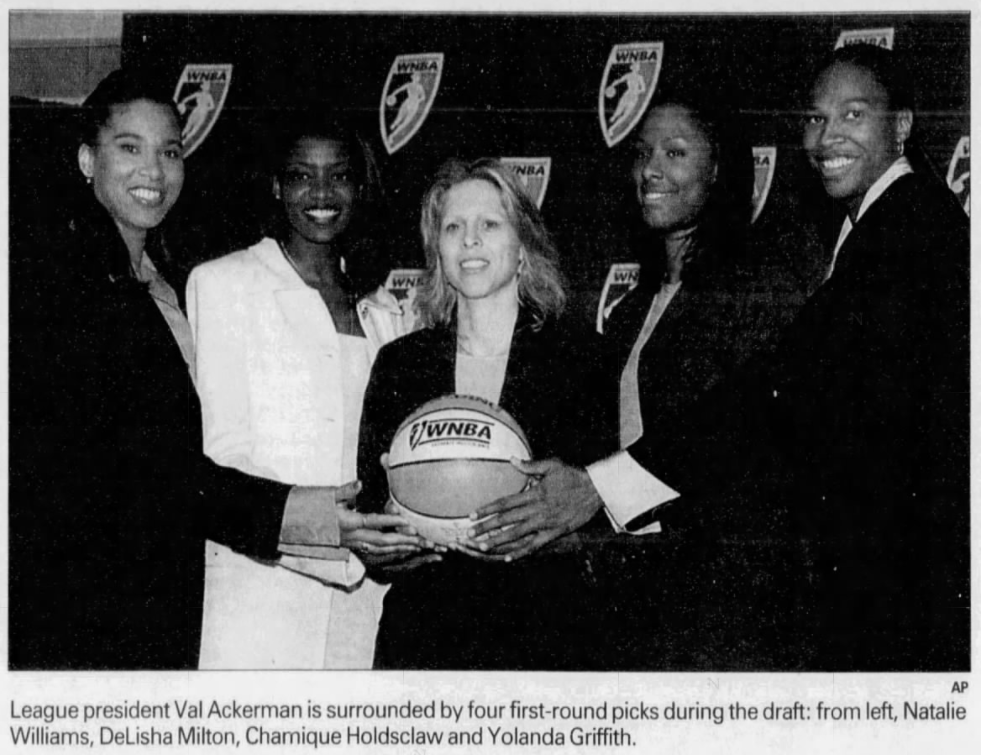 The first round of the 1999 WNBA Draft featured just one player coming out of college, Chamique Holdsclaw out of Tennessee, followed by 10 ABL pros, including names familiar to this story at the top: Yolanda Griffith (No. 2 to Sacramento), Natalie Williams (No. 3 to Utah), and DeLisha Milton (No. 4 to Los Angeles).

Griffith hit the ground running – and rebounding. In her first 18 games, Griffith had four games with 15+ rebounds – in two of them she had 19 rebounds – along with 11 games with 20+ points, including a pair of 30-point outings. Then, on July 22, 1999, she did something no one else in the WNBA had done until just this past week; she was the first WNBA player to outrebound the entire opposing team.

The Liberty players combined had just 18 rebounds, one short of Yo’s personal stat line. The Monarchs as a whole outrebounded the Liberty 41-18.

After that game, Griffith had three of the top-five single-game rebounding totals in the WNBA:

To this day, Griffith and Sylvia Fowles are the only two players in WNBA history to have back-to-back games with 19 or more rebounds.

On Tuesday, Jonquel Jones became the second player in WNBA history to outrebound their opponent with 16 boards to the Mystics’ 13, and only one other player has matched their opponent; Natalie Williams had 14 rebounds for the Utah Starzz as they beat the Detroit Shock, who also had 14 rebounds, on August 7, 2001. Lauren Jackson is next closest: on July 31, 2003, she had 20 rebounds while the opposing Charlotte Sting had 21. Jackson would go on to win MVP that season.

Leading the league with 11.3 rebounds per game and second to only Cynthia Cooper (22.1) in points per game with 18.8, Griffith ended her stint as newcomer and quickly became a mainstay in the WNBA.

Her career was marked by rebounding both literally and figuratively; after bouncing from team to team on her way to the WNBA, the duo of Griffith and Ticha Penicheiro became faces of the Sacramento Monarchs and the WNBA more broadly.

Griffith finished in the top two in the league in both rebounds per game and rebounding percentage in each of her first three seasons.

Ultimately, Griffith finished her playing career among the most decorated players in WNBA history:

She helped lead the United States women’s basketball team to a pair of gold medals (2000 and 2004) and was inducted in to the Women’s Basketball Hall of Fame in 2014.

Griffith will have to deal with being a newcomer once more: this fall, she’ll join a pantheon of basketball greats as she is enshrined in the Naismith Memorial Basketball Hall of Fame as part of the Class of 2021.