On Sunday afternoon, Dan Hughes announced his retirement from coaching in the WNBA, leaving a 5-1 Seattle Storm team sitting atop the standings in the capable hands of then-Associate Head Coach and former title-winning player with the Storm, Noelle Quinn.

The news came as a shock, but it provides a solid foundation for Quinn, a first-time head coach. It’s not often in sports a coach takes over with their team 5-1 and considered early title contenders. And just from this short clip, I got such a feeling for the person she is and that she understands this moment even beyond trying to win another ring:

In her first press conference as Head Coach, @Noey_Quinn spoke about becoming the first Black head coach in Storm history and the Black women who have coached in the WNBA that paved the way for her. #TakeCover pic.twitter.com/ZRk1NdMffe

And it is a big moment in the WNBA, even if we got here unconventionally. By my count, this now marks the fifth year in league history and first since 2018 that three former players are head coaches of a WNBA team in the same season. In 2015 it was Jenny Boucek (Seattle Storm), Sandy Brondello (Phoenix Mercury) and Stephanie White (Indiana Fever). White left for the head coaching position at Vanderbilt after the season, and Vickie Johnson got her first head coaching job with the San Antonio Stars, keeping the total at three in 2017 with Brondello and Boucek still in their same positions.

You have to go back 10 years to the 2011 season to find two Black women who played in the WNBA in head coaching positions, and their time didn’t really overlap, as Teresa Edwards took over the Tulsa Shock after Nolan Richardson’s resignation and Jennifer Gillom was fired by the Sparks the same day Edwards coached her first game.

Lastly, while I’m excited to see what Vickie Johnson can build in Dallas to try to get to the top, I’m just as excited to see how Noelle Quinn can do with a team that is already there.

That got me to thinking about situations in the past where a WNBA team went through a head coaching change partway through a season either amid success or who went on to finish the season well. It’s not common, but let’s take a look at the three who ended up with the best regular season record.

The 1997-2000 Houston Comets were a dynasty, and the early aughts version of the Los Angeles Sparks looked poised to mirror that. After winning titles in 2001 and 2002, they returned to the WNBA Finals in 2003, where they fell to the legendary worst-to-first Detroit Shock 2-1. The Shock were 25-9 that year, one spot above the Sparks in the overall standings, so it wasn’t an upset, but it did upset the Sparks’ title streak.

Despite the fallback, the Sparks were as good as ever in 2004, returning the core of Lisa Leslie, Mwadi Mabika, DeLisha Milton-Jones, Tamecka Dixon, and Nikki Teasley, coached by Lakers great Michael Cooper. Despite the success, the news dropped on July 7, 2004, that Cooper was leaving the WNBA for an assistant coaching job with the Denver Nuggets. 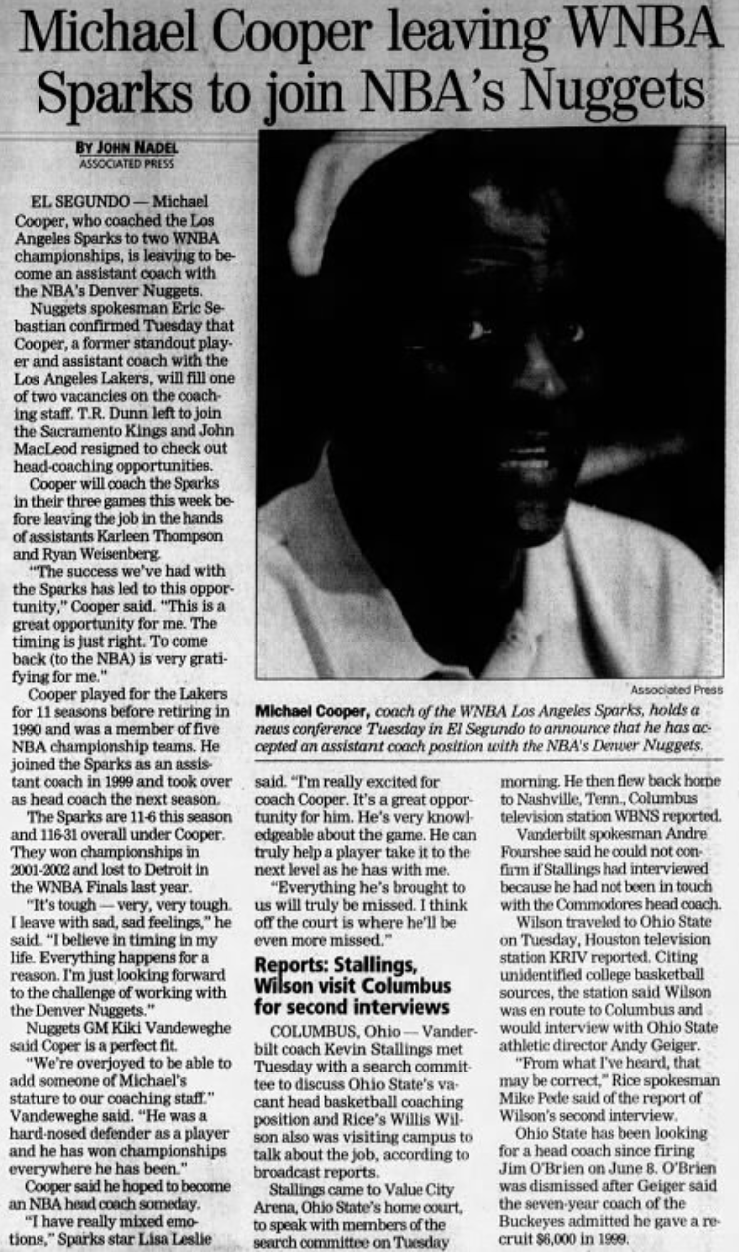 Quotes at the time made it pretty clear that returning to the NBA was always Cooper’s dream.

“The success we’ve had with the Sparks has led to this opportunity… To come back (to the NBA) is very gratifying for me,” Cooper said to The Santa Maria Times.

“I’m really excited for Coach Cooper and his opportunity to reach his ultimate goal,” Lisa Leslie was quoted as saying in the LA Times.

While Cooper was off trying to reach his ultimate goal, the Sparks fared well in his absence. Assistants Karleen Thompson and Ryan Weisenberg finished the season as co-head coached after Cooper guided the team through three more games before his exit. Cooper left the team 14-6, and the Sparks finished the regular season 11-3 under Thompson and Weisenberg. Lisa Leslie was regular season MVP, but the Sparks came up short in the postseason. After losing DeLisha Milton-Jones to a combination of right knee injuries, they didn’t have enough to get past the Sacramento Monarchs in the Western Conference Semfinals, losing the series 1-2.

Things didn’t go particularly well for the Sparks or Cooper immediately. Over the next couple of years the Sparks hired and fired head coach Henry Bibby, replaced him with Joe Bryant, and ultimately, in 2007, Cooper returned as head coach again.

Sonny Allen took over as head coach of the Sacramento Monarchs in 1999, and with the folding of the ABL, the WNBA was infused with even more professional talent, including 1999 Defensive Player of the Year and MVP Yolanda Griffith, who helped Allen and the Monarchs to their first postseason appearance.

Along with Ticha Penicheiro, Ruthie Bolton, Tangela Smith, and Kedra Holland-Corn, the Monarchs maintained their regular season success through the 2000 season but fell in the opening round of the playoffs again, but their 2001 season didn’t start out as strong. After opening the season 6-6, the team was hit with a bombshell as Allen abruptly retired from coaching. 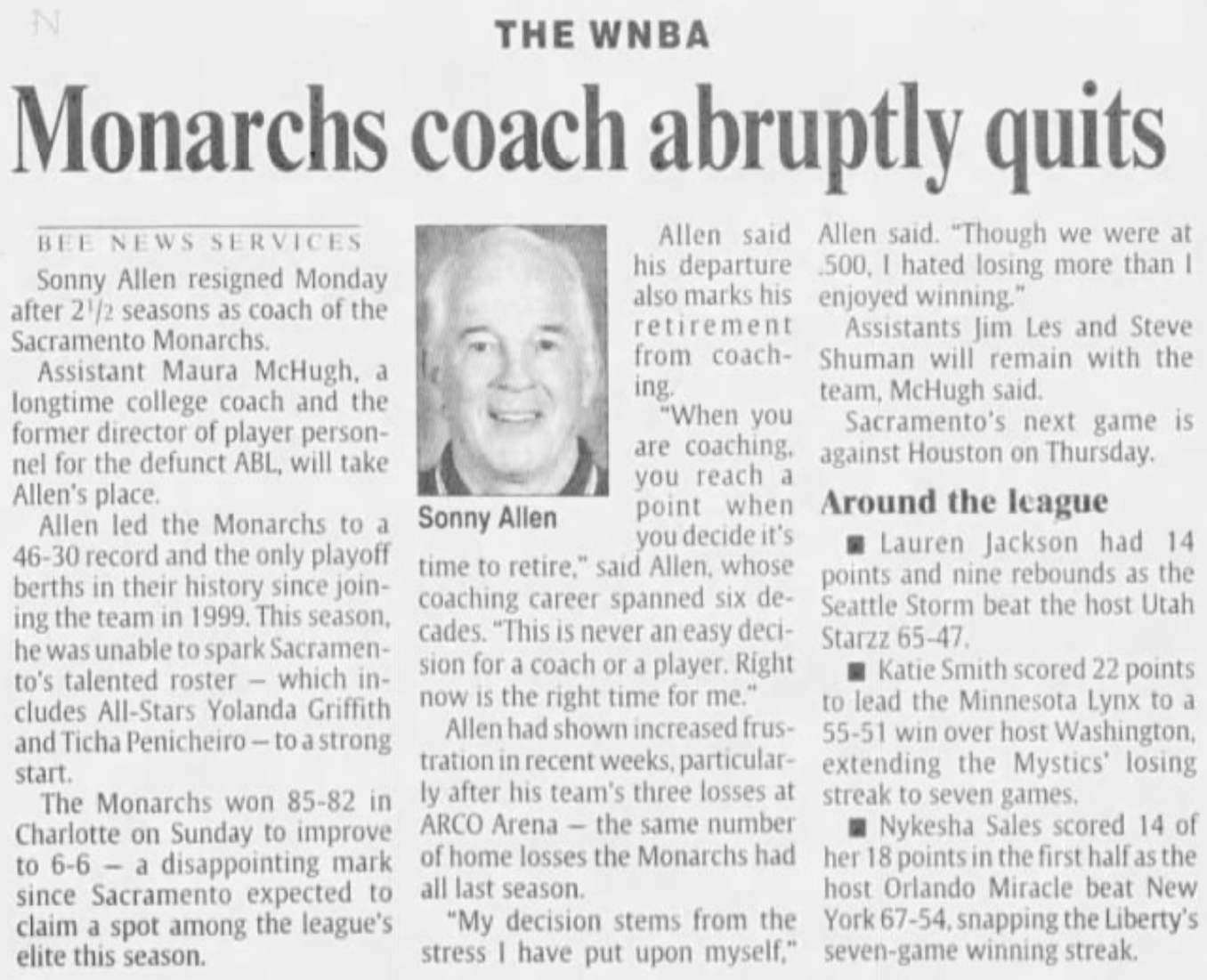 Though the team didn’t have as strong a footing, the Allen retirement mirrors Hughes’ abrupt exit.

“The older you get, the less energy you have to deal with the stress of coaching,” Allen was quoted as saying in The Sacramento Bee, adding in The Fresno Bee, “When you are coaching, you reach a point when you decide it’s time to retire… Right now is the right time for me.”

The news was sudden, but the players seemingly could tell things were off.

“[Y]ou could tell he was not really happy. There was so much pressure on him; he was not doing well. He did what was in his heart,” Ticha Penicheiro told The Sacramento Bee.

Assistant Coach Maura McHugh took over as head coach, and the Monarchs finished strong, logging a 14-6 record under her tenure. They made it to the Western Conference Finals before falling to the eventual champions in the Los Angeles Sparks.

McHugh guided the team through a middling 2002 season where they missed the playoffs before she was eventually replaced by John Whisenant halfway through the 2003 season. Whisenant ultimately got the team back to the top of the league, including their 2005 championship.

The Monarchs weren’t the only team to make a change in 2001. Fred Williams had taken over the Utah Starzz in 1999, and he was at the helm as the Starzz rose to the cusp of a postseason appearance behind the likes of Natalie Williams, Adrienne Goodson, Korie Hlede, Margo Dydek, and Jennifer Azzi.

The Western Conference was tough, so the Starzz just missed out on the playoffs, and the 2001 season started out a little rough. Early in July, after a 5-8 start, Williams announced his resignation just a couple hours before the Starzz were set to take on the Cleveland Rockers in an attempt to bounce back from a three-game losing streak.

Assistant Coach Candi Harvey took over as head coach in Williams’ absence, and the move seemed to energize the team. Harvey led the Starzz to a 14-5 finish to the regular season (19-13 overall). They ran up against the aforementioned Monarchs, falling 0-2 in the Western Conference Semifinals. Harvey was kept on as head coach through the team’s move to San Antonio in 2003 but was ultimately let go after a 6-16 start that year.

Other winning seasons through coaching changes