Quantifying the movement behind 2021 WNBA Free Agency (so far!)

With the NCAA DI WBB Tournament wrapped up, and the WNBA Draft later this week, it’s time to dive back in to this upcoming WNBA season and what we’ve seen in free agency so far.

At the end of last March I broke down some numbers relative to 2020 Free Agency, and I want to do some of the same here, with an extended look at how teams are changing and how the movement we’ve seen since the new CBA took effect last year compares to player movement in years past.

How many players are moving?

From February 10 to the May 26 initial roster cutdown date last year, 34 players changed teams via free agency and trades. From February 1 up to April 11 of this year, 33 players have moved to a new team.

As of this time last year, 11 All Stars had switched teams, with the big Tina Charles trade making it 12 just before the Draft. 2008 peaked due to massive overhauls in Los Angeles, Seattle and Indiana, and 2010 was affected by the folding of the Sacramento Monarchs. Otherwise, 2020 and 2021 stand out for their pronounced movement of players with at least one prior All Star selection.

This year’s former All Stars on the move:

The question that will be answered in coming years is: will that trend hold, or is this reflective of All Star players finding new – probably bigger – contracts and then settling in with their new teams?

To that point, take a look at the number of former top-4 picks (now the size of the draft lottery) who have moved teams.

Not to suggest that where a player is drafted accurately depicts their later value, but it’s an interesting group to pick out. Last year there was an explosion of former top picks moving teams, but that data point seems to have reverted back down closer to the recent average.

This year’s former top-4 picks on the move:

How are teams changing?

In each of the last two years, 12 players who started at least half of their teams’ games were among those who changed teams, so regardless of their All Star status or draft positioning, over a third of the players moving these past couple of years played meaningful minutes for their teams.

Let’s dive in to how teams have changed over the years, starting with how much production teams have lost in this year’s free agency. Departure numbers include players who are yet unsigned or have publicly retired.

We don’t really need statistics to tell us how little the Dallas Wings have changed. They only let go of Katie Lou Samuelson (for the No. 1 pick in the Draft) and Astou Ndour, so they’ll appear at or close to the bottom in terms of each of the departure stats.

On the other end, the Las Vegas Aces (losing Kayla McBride, Lindsay Allen, Danielle Robinson, Sugar Rodgers, Carolyn Swords, and Cierra Burdick) and Los Angeles Sparks (losing Candace Parker, Chelsea Gray, Riquna Williams, Reshanda Gray, and Marie Gülich) have lost a lot of their 2020 production. The Aces lead having lost players accounting for 46.3% of their 2020 regular season minutes, and the Sparks are close behind at 44.3%. The Sparks feel it in their points production, too. 48% of their 2020 regular season points are no longer on their roster, far and away leading the league. Next closest is the New York Liberty at 36.7%, followed by the Atlanta Dream at 34.3% and Washington Mystics at 34.2% of their points lost. The Sparks’ loss of 54.9% of their 2020 rebounds is also way beyond the losses felt by the Storm (44.0%) and Mystics (38.8%).

That Sparks point production lost is not an all-time high, but if you take out last year’s teams affected by opt-outs, it is top-30 among all past year-over-year team changes. The 2020 Atlanta Dream lost players representing an all-time high 81.2% of their points scored from 2019, and the 2019 Liberty lost 74.5%, but both teams were severely affected by key players opting out of the season on top of normal free agency changes.

Prior to 2020 the 2010 Tulsa Shock led this category, losing players representing 67.2% of their scoring after relocating from Detroit following the 2009 season. Deanna Nolan (16.9 points per game) and Cheryl Ford (8.6 PPG) never returned to the league, Katie Smith took her 13.7 PPG to the Washington Mystics, and the Shock traded Shavonte Zellous (11.9 PPG) to the Fever, just to name a few.

Beyond the rebuilding, struggling early years of the Tulsa Shock, the 2003 Phoenix Mercury also stand out having lost 62.7% of their scoring from the prior year. It started with Cynthia Cooper returning from coach of the Mercury back to player for the Comets, followed by Jennifer Gillom (15.3 PPG) moving to the Sparks and the departure of Brandy Reed (7.6 PPG), along with several others.

What about the trades?

Part of the excitement of last offseason was the 16 offseason trades (plus the Stephanie Mavunga / Jantel Lavender deal in-season). Only one calendar year has had more WNBA trades total, and that was the 22 trades in 2002, a year that had 16 teams compared to just 12 now.

So far this year, we have seen 10 trades executed, better than just five prior seasons. Four of the trades last year came during draft week and on draft night itself, and it will not be surprising to see some more trades ahead of and during this year’s draft.

While the number of trades hasn’t been up there yet this year, 2021 Free Agency did see movement of the No. 1 draft pick, just the second time in league history the top pick has been traded before the draft. This year’s top pick moved multiple times – it went from New York to Seattle to Dallas – but the 2010 No. 1 pick (which became Tina Charles) moved even more, also starting in New York before moving to Los Angeles, on to Minnesota, and eventually to the Connecticut Sun in the massive Lindsay Whalen / Renee Montgomery deal.

Another record-holder: on February 9, the 2021 No. 16 pick was traded for the third time, tying it with the aforementioned 2010 No. 1 pick and the 2020 No. 7 pick (became Tyasha Harris) for the most trades for a single draft pick.

If you’re interested in finding out more about the WNBA’s trade history, you can explore the sequential history of trades and the aggregated trade statistics. The WNBA Draft database also includes trade details for every traded pick; just click the orange text!

What about a visual?

To round things out, here’s a visual representation of current rosters accounting for the latest player movement, with current team rosters colorized by the player’s association coming in to this season, to help give an idea of how much movement there has been and where. 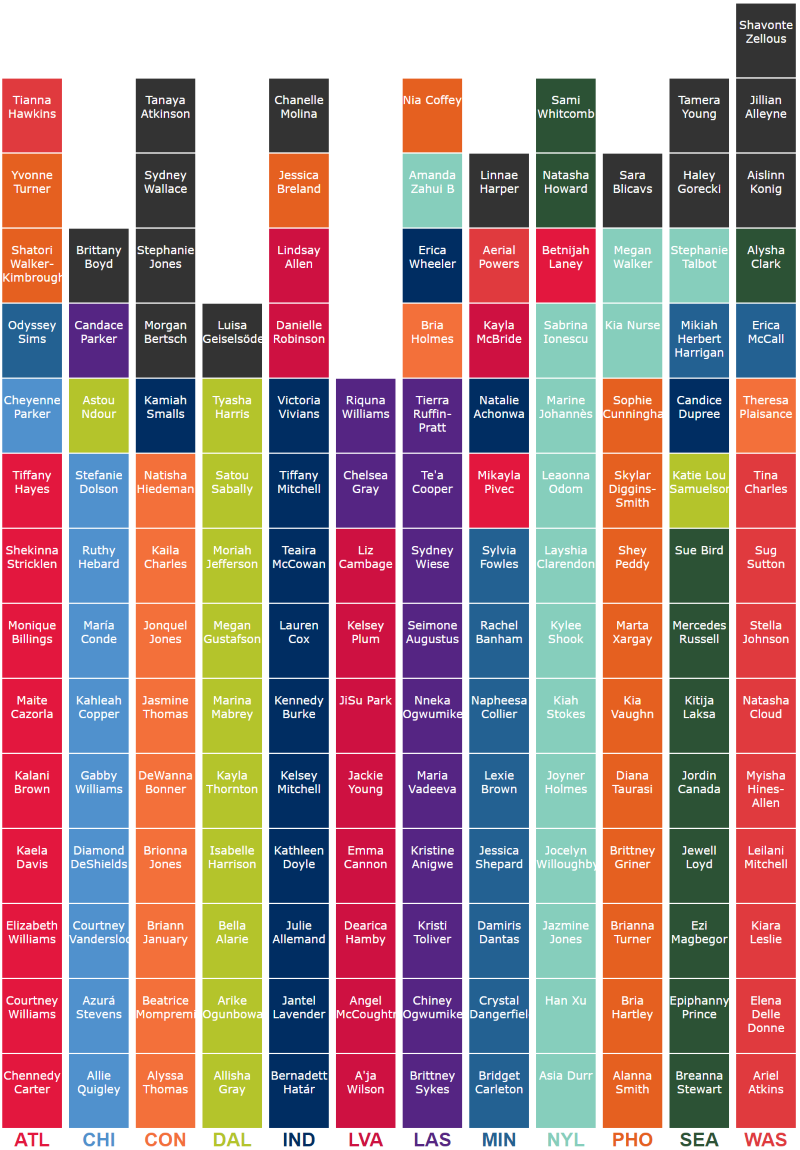